While arrests are made at the G8 meeting protests in Halifax, Toronto police say this city should brace for major demonstrations and disruptions during the G20 in the downtown core this summer.

Police say they're tapping social media for tips on major protests to prepare for the meeting of major world leaders in June.

Const. Wendy Drummond says police have dealt with protests organized through social media in the past, and they're taking steps to prepare for the June 26/27 weekend.

"(Social media) allows people to communicate in a lot more different ways. It's just another tool," she says. "The way we police our protests hasn't changed."

Thousands of officers are expected to be out in full force as protesters descend on the downtown core at the end of June.

Drummond says they have met with some protest groups to talk about how they plan to express themselves in a peaceful manner.

But others have not talked to law enforcement officials.

"There are some groups that don't wish to participate in these advanced conversations," she says.

Police also say they have obtained access to a massive local film studio - one of the largest in North America - to use as a staging area and potentially, as a holding area for anyone arrested. 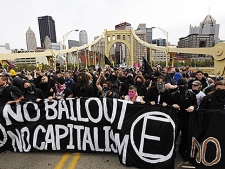