RICHMOND, B.C. - There will be no charges laid against Canadian pop star Justin Bieber in connection to an incident at a laser tag centre in Richmond, B.C.

Mounties say the investigation is complete and no recommendations will be forwarded to Crown counsel because the evidence collected doesn't support a charge.

Police began their investigation into an alleged assault after the father of a 12-year-old boy came forward with a complaint.

The father told police his son was assaulted by another boy at the entertainment centre and had minor injuries that didn't require medical attention at the time.

Mounties have never specifically said that the 16-year-old teenage singing sensation was the focus of their investigation, but he was in Vancouver at the time of the Oct 16. incident to perform a concert.

Bieber has been met by mob scenes several times around the world including in Australia where a performance had to be shut down because thousands of girls surged towards the stage, injuring eight people. 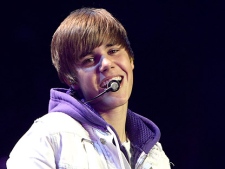