Soldiers at Kandahar Airfield are taking apart the white marble cenotaph that bears the names and likenesses of the Canadians who have lost their lives as part of the mission in Afghanistan.

"It's a sense of profound pride that these soldiers are taking this apart and having the opportunity to repatriate some of the faces and names of our 158 fallen," said Lt.-Col. Mark Flint, who is leading the team of engineers who are packing up the cenotaph.

The cenotaph has long been a sombre fixture at the airfield, located behind the two-storey Canadian headquarters and a few paces from the spot where tents for journalists once stood.

A team of engineers is packing up the 158 black granite etchings of every Canadian killed as part of the Afghan mission. The plaques and the marble structure will be shipped back to Canada, where they will remain in storage until the military and politicians decide what to do with them.

The Defence Department has said it plans to erect a new monument in the Ottawa area. One spot the military is apparently considering is Beechwood Cemetery in the city's east end, which is already home to the national military cemetery where many veterans are buried.

Work began Saturday morning, a day after people gathered at the monument to mark Canada's last Remembrance Day in Kandahar.

By noon, nearly every plaque had been removed and carefully laid in large wooden crates. The high-pitched scream of circular saws could be heard outside the Canadian compound as engineers cut into the marble structure.

The precise placement of every plaque was dutifully recorded so the monument can be rebuilt exactly the same in Canada.

One piece of the monument won't return home just yet.

A jagged chunk of rock will be sent back to Kabul to serve as a temporary memorial for the Canadians who serve as part of the NATO training mission.

Insurgents used that rock to divert a vehicle carrying Cpl. Robbie Beerenfenger and Sgt. Robert Short over a deadly land mine in October 2003.

"The significance of that rock is pretty important, and we're going to repatriate it to Kabul until further notice," Flint said.

Taking apart the cenotaph is a small piece of a larger, highly complicated puzzle.

"This is an important aspect of doing these types of missions," said Brig.-Gen. Chuck Lamarre, who is leading a contingent of about 1,000 soldiers who are packing up and moving the remnants of a decade of war.

"And this one in particular, there's an emotional aspect to it that is moving," Lamarre said.

"We want to make sure that we take this back so that Canadians back home can get an appreciation of not only the work that was done by their soldiers here, but also the sacrifice."

The Canadian Forces have taken down more than 200 structures at Kandahar Airfield and moved 1,800 sea containers and close to 1,000 vehicles as the deadline to pull out of southern Afghanistan draws near.

The military expects to be completely out of Kandahar Airfield by mid-December. 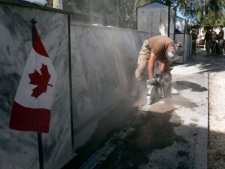