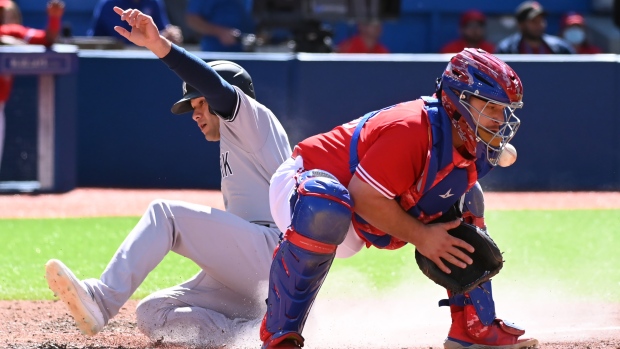 TORONTO - Aaron Hicks drove in three runs with a double and the New York Yankees held on for a 4-0 win over the Toronto Blue Jays on Saturday.

Michael King and Clay Holmes came on in relief to complete the shutout.

The Blue Jays have lost three straight with the Tampa Bay Rays closing in on them for second in the American League East.

New York leads the division by 12 games with Saturday's win.

Hicks hit his bases-clearing double in the fourth inning.

Manoah loaded the bases and, with two outs, Hicks stroked the ball to right field to cash in Anthony Rizzo, Gleyber Torres, and Isiah Kiner-Falefa.

In the next at bat, Jose Trevino attempted to check his swing but was hit by the pitch.

Manoah and Toronto manager Charlie Montoyo argued with the umpires, saying that Trevino did not check his swing and should have been called out rather than taking first.

Montoyo was ejected from the game after getting into it with home plate umpire Ryan Additon and first base ump Ryan Wills.

Toronto left-fielder Raimel Tapia appeared to catch a Torres fly ball at the wall in the sixth inning.

Upon video review, it was ruled that the ball popped out of Tapia's glove and bounced off the fence before he regained control, which gave the Yankees infielder a double.

That misplay came back to haunt the Blue Jays, as Kiner-Falefa doubled to bring home Torres for a 4-0 Yankees lead.

Manoah's outing ended after that run, with his earned-run average on the season rising to 2.00.

RYU HAS SURGERY - Starting pitcher Hyun-Jin Ryu underwent Tommy John surgery. Ryu is expected to be out for 12 to 18 months following the procedure.

UP NEXT - Toronto's Yusei Kikuchi (2-3) will get the start as the Blue Jays close out their three-game set with the Yankees on Sunday. New York will counter with Luis Severino (4-1).