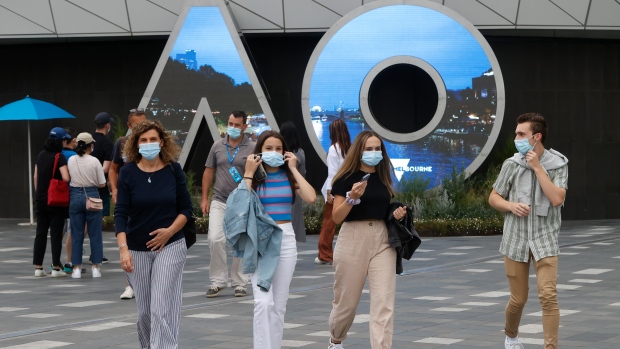 MELBOURNE, Australia (AP) - The Australian Open started Monday without nine-time champion Novak Djokovic and, finally, the focus was on forehands and backhands instead of his fight to avoid deportation because he isn't vaccinated against COVID-19.

And it got started in a big way, with a combined 64 matches scheduled on Day 1 in both men's and women's brackets.

Naomi Osaka started her title defense by winning the first five games on the way to a 6-3, 6-3 victory over Camila Osorio in the second match on the tournament's main court.

With so much attention on the 11-day saga of Djokovic's attempt to participate in the year's first Grand Slam tournament, and bid for a fourth consecutive title at Melbourne Park, Osaka's return to action has been overshadowed.

After winning here last year, capturing her second Australian Open title in three years, the four-time major winner pulled out of the 2021 French Open before the second round, then sat out Wimbledon. She played at the Tokyo Olympics, where she lit the cauldron, but ended her 2021 season early after a third-round loss and a teary news conference at the U.S. Open.

Two of her goals for 2022, she said last week, were to stay completely composed on the court and off, and to enjoy the game.

A smile when she completely whiffed an overhead to give Osorio a breakpoint chance in the seventh game maybe was a sign of the new approach. She dropped that service game but recovered quickly.

“It just feels really nice to start the year with this tournament,” Osaka said in a post-match, on-court interview. “I thought I played really well given the circumstances.”

Fifth-seeded Maria Sakkari started the program on the main court at Melbourne Park with a 6-4, 7-6 (2) win over Tatjana Maria.

“I was a little bit stressed because I was opening up this tournament on this wonderful court. It's a privilege,” Sakkari said. “I'm very glad that I was able to find a way to win and to keep myself in the tournament.”

In other early results on Day 1 of the first major tennis tournament of 2022, Tokyo Olympics gold medalist Belinda Bencic beat Kristina Mladenovic 6-4, 6-3, and 15th-seeded Elina Svitolina got past Fiona Ferro 6-1, 7-6 (4).

Anisimova, a 20-year-old American who is coming off a title in a tune-up event held at Melbourne Park the first week of January, described what went on with Djokovic as “a very messy situation.”

“It's very complicated,” Anisimova said. “So, I mean, you can take either side . . . It's honestly very sad that it had to end that way.”

Later Monday, Rafael Nadal was set to renew his bid for a men's-record 21st Grand Slam singles title with a first-round match against Marcos Giron of the U.S. Nadal is tied with Djokovic and Roger Federer with 20 major trophies.

Nadal won the Australian Open in 2009 and is the only past champion in the men's bracket after Djokovic's late withdrawal Sunday because he was forced to fly out of the country when a court upheld the cancellation of his visa. Federer is skipping the tournament to continue recovering from right knee surgery.

Djokovic had been scheduled to play Monday night's last match in Laver, following No. 1-ranked woman Ash Barty's contest, but instead the 34-year-old Serb was on a flight that landed in Dubai.

The top-ranked Djokovic spent the last week and a half at the center of an unprecedented saga over his vaccination status, a stretch including two court hearings and time in immigration hotel detention before and after he won his first appeal.

It began when he was granted an exemption to strict vaccination rules by two medical panels and Tennis Australia in order to play in the Australian Open.

That exemption, based on evidence that he recently recovered from COVID-19, apparently allowed him to receive a visa to enter Australia. But upon arrival, border officials said the exemption was not valid and moved to deport him.

Showing evidence of vaccination is a requirement for anyone - players, coaches, fans, others - entering Melbourne Park for the tournament.

A security official with a loudspeaker reminded people lining up outside the complex early Monday to have proof of vaccination ready for inspection and added: “Oh, a ticket would be handy, too!”

Fans were taking photographs at the main stadium in front of an image of Djokovic holding up the trophy he won each of the past three years.