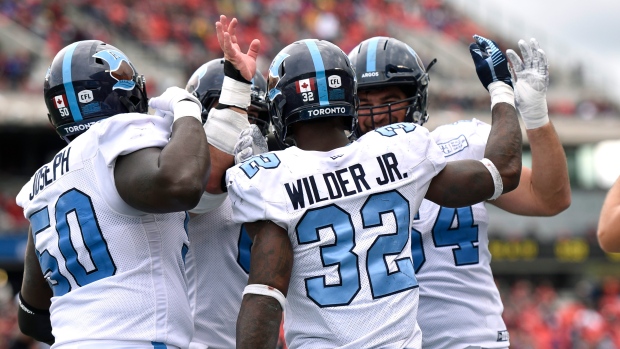 Toronto Argonauts running back James Wilder Jr. (32) celebrates a touchdown against the Ottawa Redblacks with teammates during second half CFL football action in Ottawa on Saturday, Sept. 7, 2019. THE CANADIAN PRESS/Justin Tang

OTTAWA - In Corey Chamblin's mind the Toronto Argonauts have finally responded to hardship.

McLeod Bethel-Thompson threw three touchdowns and two interceptions as the Toronto Argonauts downed the Ottawa Redblacks 46-17 on Saturday for their first road win since 2017. The Argonauts scored 21 points in the fourth quarter as Toronto had more than 30 points for the first time all season.

“They stepped up today.”

Bethel-Thompson completed 26-of-39 passes for 411 yards for the Argonauts (2-9) and James Wilder Jr., scored the team's first rushing touchdown of the year.

Wilder had a total of three touchdowns, one a result of a fumble by Redblacks running back Mossis Madu at Ottawa's 13 late in the game. Toronto outscored Ottawa 28-4 in the second half.

For the Redblacks (3-8) it was another disappointing outing as they dropped their fourth straight and eighth of their last nine.

“We knew what we needed to do and this was a huge game especially with Montreal winning (Friday) night,” said Madu. “We needed this one bad so it hurts, it really hurts. We've got to be better.”

Quarterback Jonathon Jennings was 32 for 41 for 320 yards with one TD and one interception for Ottawa (3-8).

Redblacks head coach Rick Campbell said he felt optimistic about his team's chances at the half and can't help but be frustrated by how things turned out.

“We just didn't end up making plays in the second half and obviously it went sideways,” he said.

Ottawa had far too many penalties and made too many mistakes to salvage this one. The Redblacks had 13 penalties for 120 yards, compared to Toronto's six.

“Things unravelled in this game and not in our favour,” said Ottawa defensive back Chris Randle. “We should have capitalized on this game. This is definitely a missed opportunity on our end. We've got to soak this one in and be uncomfortable with this feeling.”

The turning point could be considered the start of the second half as Brad Sinopoli fumbled the ball at Ottawa's 47 and it was returned by Qudarius Ford for a touchdown to give the visitors a 25-13 lead.

“That's a huge momentum swing,” admitted Jennings. “It takes away a drive that we had going and obviously gives them a big momentum swing with the points on the board. It was tough, but it wasn't anything we couldn't dig out of, but we just didn't make the plays to get ourselves out of it.”

Midway through the third quarter the Redblacks got down to Toronto's 25-yard line, but settled for a 42-yard field goal to trail 25-16 after three quarters.

The Argos led 18-13 at the half in an opening stretch that featured a number of miscues by both teams.

The second quarter started with a Jennings pass getting picked off in the end zone.

Toronto took an 18-11 lead as Rodney Smith took in a 24-yard TD pass. Ottawa had a great chance to knot things back up, but a wide-open Madu couldn't handle a pass in the endzone, forcing the Redblacks to settle for a 16-yard field goal.

Ottawa opened the game with its first opening drive TD of the season as Jennings connected with Sinopoli to take a 7-0 lead.

The teams each scored a field goal and with its first rushing TD of the season, as Derel Walker had a one-yard run, the Argos tied the game 10-10.

Ottawa suffered a tough loss when safety Antoine Pruneau left the game late in the first quarter and was seen on the sidelines with a boot on his right leg and using crutches. Campbell had no update, but is hopeful Pruneau won't be out long as they take on the B.C. Lions next Friday.