Bianca Andreescu makes Canadian history by reaching No. 4 in rankings 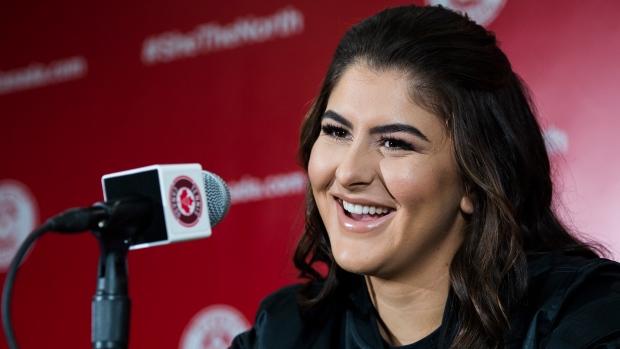 Bianca Andreescu speaks to the media after she became the first Canadian player to win a Grand Slam singles title when she defeated Serena Williams in the final of the US Open, in Toronto on Wednesday, September 11, 2019. THE CANADIAN PRESS/Nathan Denette

The 19-year-old from Mississauga, Ont., jumped one spot to No. 4 in the rankings on Monday following a week off.

That pushes her one spot ahead of her career-best No. 5 ranking, which tied a Canadian record set by Eugenie Bouchard in 2014.

Ranked outside the top 150 entering the season, Andreescu rocketed up the rankings with tournament wins at Indian Wells, Calif., and Toronto followed by her first Grand Slam win at the U.S. Open in New York last month.

Andreescu had a 17-match win streak snapped when she lost a quarterfinal match to Naomi Osaka at the China Open earlier this month.

The Canadian is scheduled to return to action at the WTA Finals, which begin on Sunday in Shenzhen, China.

Milos Raonic reached No. 3 in the men's rankings in 2016, the best ranking achieved by a Canadian man.

On the men's side, Denis Shapovalov of Richmond Hill, Ont., jumped seven spots to No. 27 after capturing the Stockholm Open on Sunday for his first career ATP Tour title.

Montreal's Felix Auger-Aliassime is the top Canadian at No. 18.

Shapovalov, Auger-Aliassime and Raonic all are entered in the Erste Bank Open this week in Vienna, Austria.