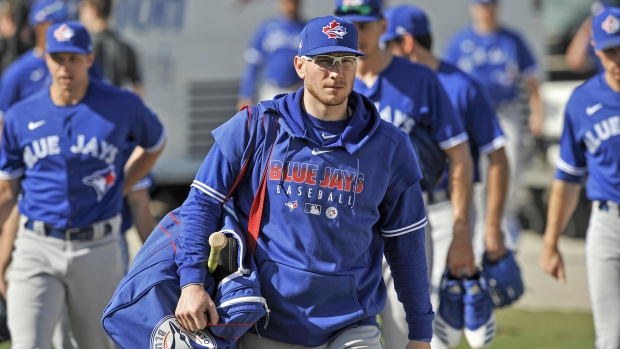 Danny Jansen figures some stability in the Blue Jays' pitching staff will help make his job behind the plate a little easier this season.

Toronto had 21 different pitchers shuffle in and out of the rotation through 2019 - and 39 pitchers in total including bullpen arms - as the team tried to patch its way through a 162-game schedule.

But the off-season acquisitions of Hyun-Jin Ryu, Tanner Roark and Chase Anderson, coupled with the return of a healthy Matt Shoemaker, should make the 2020 Blue Jays pitching staff much more consistent.

While Jansen is looking forward to feeling that stability, the 24-year-old catcher said there were some positives to being forced to build a rapport with a number of pitchers in a short span of time - and in his first full season in the majors, no less.

“That was one of the challenges last year,” Jansen said recently at the team's spring training stadium in Dunedin, Fla. “Looking back on it though, learning how to do that - the fast communication and the trust you have to develop real quick - going into a game for the first time never even catching a guy before, it's going to make me better.

“I take a lot of good things away from it, but it's a good thing to have stability, obviously. The familiarity and (being able to) just keep building off that stuff, it's good.”

The Blue Jays 2019 pitching woes started early, with promising sophomore left-hander Ryan Borucki experiencing an elbow injury during spring training. Then Shoemaker, new to the team after signing in free agency, suffered a torn ACL in April and was done for the remainder of the season.

Another rotation shakeup came at the trade deadline, when Toronto dealt Aaron Sanchez to the Houston Astros and Marcus Stroman to the New York Mets.

While Borucki has been slowed by soreness in his throwing elbow once again and won't be ready for Opening Day, Shoemaker looked good in his first exhibition outing on Monday, allowing just one hit over 2 2/3 innings.

Right-hander Trent Thornton, who went 6-9 with a 4.84 earned-run average in his rookie season last year, was one of the more reliable rotation arms in 2019.

Jansen believes the 26-year-old Thornton is poised to continue that success in 2020.

“Thornton had a great year last year and he looks really strong,” Jansen said. “He's definitely a little bit of a different man coming in. He's got a little fire, he always has but (now) he has a little bit more.

“There's a lot of (good pitchers in camp) though. It's very talented here and it's very exciting.”

While Jansen's main job is to call the game behind the plate, he said he also took steps to improve consistency in his offence during the off-season.

Jansen, who had hit well in the minors over the last few years before making his MLB debut in August 2018, batted .207 with a .279 on-base percentage over 107 games with Toronto last season.

“I know I struggled offensively but when I look back on it, that's going to make me a better player and it already has,” Jansen said. “I finally have an offensive routine that's gotten a lot stronger ... If I hadn't struggled I might not have had this strong of a routine now going into the season.

“And defensively, there's a lot of things I can take from (last season). First time in the big leagues, learning all the information, learning how to use it, catching a lot of different guys, (I gained) a lot of experience and I'm going to go from there.”

In terms of getting to know a virtually entirely new pitching staff, Jansen doesn't expect that process to take very long.

His experience from last season got him used to that.

“It's obviously just trust and communication and talking, getting to know what they like to do,” Jansen said. “Then it's just going right into the fire and playing with each other. I think that's a good way to do it.”

This report by The Canadian Press was first published March 4, 2020.