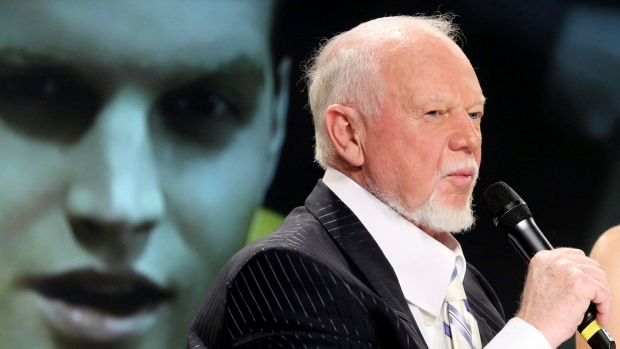 FILE _ In this March 24, 2010, file photo, hockey personality Don Cherry, right, speaks during a news conference as actor Jared Keeso is displayed on a video screen while playing Cherry in the bio film "Keep Your Head Up Kid: The Don Cherry Story" in Toronto. Sportsnet cut ties with Cherry on Monday, Nov. 11, 2019, after the veteran hockey commentator called new immigrants "you people" on his "Coach's Corner" segment while claiming they do not wear poppies to honor Canadian veterans. (AP Photo/The Canadian Press, Darren Calabrese, File)

TORONTO - Former NHL executive Brian Burke is listed as the heavy favourite to be Don Cherry's successor on “Hockey Night in Canada” on one sports betting site.

SportsBettingDime.com has released odds on candidates to replace Cherry after the commentator was sacked by Sportsnet yesterday for a rant about immigrants not wearing poppies on his “Coach's Corner” segment on Saturday.

Burke, who currently works as an analyst at Sportsnet, is listed as the 3-2 favourite (must bet $2 to win $3) to appear on Cherry's longtime “Coach's Corner” segment on Saturday.

Burke is the 5-4 pick to be the full-time replacement next season.

Sportsnet has not said whether it plans to keep the “Coach's Corner” segment, which has been a first-intermission staple on HNIC.

Sportsnet hockey commentators Kelly Hrudey, Colby Armstrong and Craig Simpson are among the other betting favourites for Cherry's job.

The site also is taking odds on what Cherry does next, with working for another media organization the favourite.

If he goes into politics, the odds consider Cherry's most likely destination to be under Ontario Premier Doug Ford and the Conservative party.