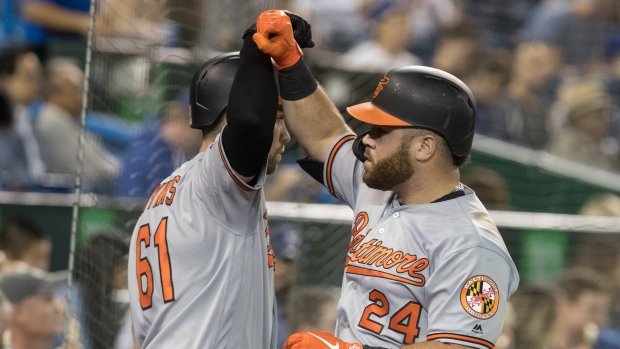 Baltimore Orioles DJ Stewart, right, is greeted by teammate Austin Wynns after Stewart hit a two-run home run against the Toronto Blue Jays in the sixth inning of their American League MLB baseball game in Toronto on Tuesday, September 24, 2019. THE CANADIAN PRESS/Fred Thornhill

Dwight Smith Jr., Austin Wynns and DJ Stewart homered for Baltimore (52-106), which scored three runs apiece in the first, sixth and eighth innings. Mancini was 5 for 5 with two doubles, three singles and one RBI.

Derek Fisher homered for the Blue Jays (64-94) and Breyvic Valera drove in a run. Reese McGuire and Rowdy Tellez chipped in with ninth-inning RBI's.

Bundy (7-14) allowed just three hits - only one through the first five innings - and two runs while striking out six and walking two.

Thomas Pannone (3-6) started for Toronto, allowing three runs on four hits through just one inning. Scheduled starter Anthony Kay was a late scratch due to back pain.

The Blue Jays were coming off their longest game of the season Monday night, an 11-10 walkoff over Baltimore in 15 innings that lasted five hours 21 minutes.

But the Orioles showed little sign of fatigue Tuesday, jumping on Toronto's pitchers - the Jays used eight in all - early.

Renato Nunez put the Orioles up 2-0 with a double off Pannone in the first inning, and a single from Smith extended the lead to 3-0. The runs followed a weird play where Mancini hit a deep fly to left field that Fisher looked to have caught before it dropped out of his glove late.

Fisher's homer pulled Toronto within two runs in the bottom of the third, temporarily igniting the small crowd of 12,625, but Dwight responded in the fourth with a solo shot off Wilmer Font to restore the three-run cushion. Wynns's first homer of the season three batters later extended Baltimore's lead to 5-1.

Stewart launched a two-run homer in the top of the sixth and Mancini followed soon after with an RBI single for his fourth hit of the night.

Rio Ruiz, Smith Jr. and Stewart plated three more Baltimore runs on a trio of singles in the eighth, sending most of the remaining fans to the exits.

Baltimore, which outhit the Blue Jays 15-6, improved to 8-10 against Toronto this season.

The teams wrap up their season series Wednesday night.