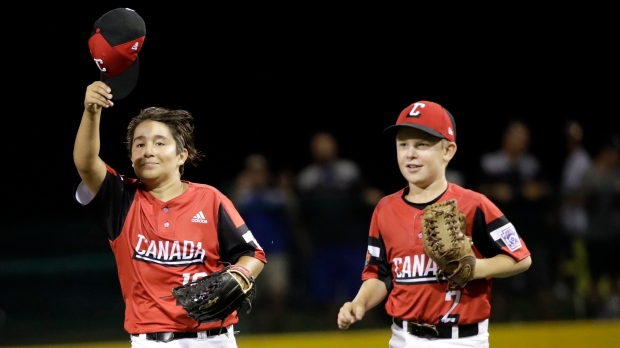 British Columbia's Piero Leon-Carney (10) tips his cap to the crowd as he and Tory Hutchinson run off the field after the final out against Italy in the fourth inning of an elimination baseball game in international pool play baseball game at the Little League World Series tournament in South Williamsport, Pa., Saturday, Aug. 17, 2019. (AP Photo/Tom E. Puskar)

WILLIAMSPORT, Pa. - Canada was eliminated from the Little League World Series following an 8-1 loss to the Caribbean team on Monday.

Curley Martha and Nathan Castillo each had two hits and drove in a run for the Caribbean representatives from Curacao.

Brady Dorwart scored on a passed ball in the top of the sixth and final inning for Canada, which managed just three hits.

Following two scoreless innings, the Caribbean doubled its lead in the bottom of the fifth with an RBI single from Deshandro Tromp, a two-run error that scored Castillo and Tromp and an RBI triple from Pe.son Revierre.

Keven Rosina went the distance for the Caribbean, striking out seven and not surrendering an earned run.

Timmy Piasentin struck out eight but allowed seven earned runs for Canada over 4 2/3 innings. Dorwart gave up Revierre's triple before inducing a pop out in foul territory in relief.

The Canadian entry from Coquitlam, B.C., opened the double-elimination tournament with a 5-0 loss to Mexico on Friday before rebounding with a 10-0 win over Italy on Saturday.