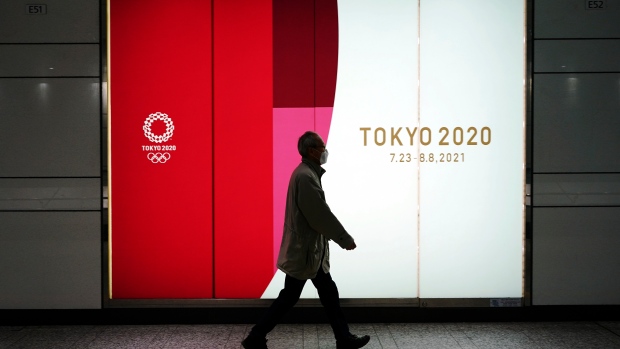 A man wearing a protective mask to help curb the spread of the coronavirus walks near a banner of the Tokyo 2020 Olympics at an underpass in Tokyo Tuesday, Jan. 19, 2021. (AP Photo/Eugene Hoshiko)

TORONTO - Erica Wiebe had just wrapped up a training session on Thursday night when the messages started pouring in before she had a chance to check social media.

The positive thoughts came in the aftermath of The Times of London report that the Tokyo Olympics will have to be cancelled because of the COVID-19 pandemic.

Both the Canadian Olympic and Paralympic Committees responded, saying the IOC is committed to staging the Games this summer. But any noise and uncertainty only cranks up the anxiety level of athletes already experiencing an Olympic year unlike any before.

It can be overwhelming on the best of days, Wiebe said.

“Being really clear on your purpose in this whole thing, and having goals that you can work towards on a daily basis, weekly basis, monthly basis, definitely provides some ability to focus,” said the three-time Olympian and gold medallist in Rio in 2016.

“(But) it's like man, I kinda wish we could go back and just talk about the condom shortages at the Olympic Village, you know?” she added, with a laugh.

Citing unidentified sources, the Times said the Japanese government has decided the Olympics must be cancelled. The story saw IOC president Thomas Bach and local organizers pushing back on Friday.

COC chief executive officer David Shoemaker, who'd attended a previously scheduled meting with Bach and other national Olympic committees on Friday, said the IOC reiterated that reports of a cancellation are “categorically untrue.”

Now set to open July 23, the Tokyo Games were postponed 10 months ago at the outbreak of the coronavirus pandemic.

Athletes are creatures of habit, their lives, particularly in an Olympic year, meticulously scheduled.

But travel restrictions and lockdowns around the pandemic have already turned their lives upside down, and athletes who have been taught to tune out negativity are also human.

“One thing 2020 taught me is: Kayla, just control the controllables,” said Kayla Alexander, a member of Canada's women's basketball team.

“There's so many things that are outside of our control right now. I don't know what's going on with COVID. There's another couple strands out there. It has already postponed seasons (NBA, WNBA, NHL, among others). It's cancelled seasons. It's postponed the Olympics. It is literally out of our control.”

Women's basketball is one of eight Canadian teams that have qualified for the Olympics, which is a relief, Alexander said. Saturday marks six months to the day from the Tokyo opening ceremonies, and there are huge question marks around how qualifying will happen. Only about half of the 11,000 athletes worldwide have qualified.

“So, what can I control? I can control my attitude,” said Alexander, who's playing for Belgian team Royal Castors Braine this season. “So I just try to get better every day and not focus on the big stuff. Because it can drain you. It can put you down a hole.”

“But I've taken on the mentality of keeping my head down and training as if everything will be fine this year,” he said. “I have no idea what the year will look like in terms of the Olympics being hosted and other competitions. But one thing I can guarantee is that I will be ready when it's time to go.”

Swimming Canada pushed back its Olympic and Paralympic swimming trials to late May, and provisionally nominated six people to the Tokyo team Friday, including Kylie Masse.

The two-time world champion said speculation about Tokyo has taken a toll on athletes, but she tries to avoid it “because the more and more you hear those things, the more it can get in your head and I don't really think it's beneficial, personally for me, to begin to believe they're not going to happen,” Masse said.

“Especially during COVID,” she said. “Things change with the government like we change our underwear - daily. It's a hard issue to deal with, but we as athletes have learned to be adaptable. I used to be reactive with facility closures, meet cancellations, etc., but now I just wait a few days.”

“It was the novelty of not knowing that was difficult mentally, and often disrupting my motivation and focus,” he said. “(But) we lost access to our facilities and were completely taken out of our routine. We've at least seen progress since then, especially with the vaccination distributions, so there is hope down the road . . .

“The issue now is the timeline of when big global events like the Olympics will be able to occur with no roadblocks.”

Several reports of a cancellation began to surface this month when the Japanese government put Tokyo and other prefectures under a state of emergency order to counter a surge of rising COVID-19 cases.

Many believe the vaccination of Japan's 127 million citizens will be key to hosting a successful Games. But uncertainty around that is also growing in a country ranked among the world's lowest in vaccine confidence.

The Australian Open has been a snapshot of what can happen in a large gathering of athletes - 72 tennis players are under strict lockdown in Melbourne after exposure to the virus.

Surf Canada executive director Dom Domic reiterated that athletes are adaptable, calling it one of the biggest factors in success.

“That includes training and mindset. With this (Times report), it's just another hurdle, another challenge, another element within the larger natural world that we live and play in,” he said. “I think surfers in general just have that ability to adapt. The ocean is uncontrollable and we play in that environment. So this is just taking that to another step, another part of the spectrum I guess.”

It's not surprising that the uncertainty has taken a toll on the mental health of athletes grappling with the possibility of dreams dashed.

“I think for an athlete right now trying to focus on just trying to just put their head down and train hard, the speculation really doesn't help,” said Thomas Hall, an Olympic medallist in canoeing in 2008, and the manager of Game Plan.

“It's not easy to train for the Olympics and Paralympics. And it's harder than ever before. And so I have an enormous amount of respect and compassion for what they're going through,” said Hall.

Established five years ago by the COC, CPC, and the country's network of sport institutes, Game Plan is a high-performance wellness and transition program covering career management, networking, education, skill development and health.

Game Plan has partnered with Morneau Shepell, which has a 24-hour hotline that gives athletes anonymous access to free counselling services and legal support.

“I've tried to put myself in their shoes. A (normal) Games year is incredibly stressful. I didn't notice it necessarily when I was living it, but all people around me knew that I was on edge and knew how tense I was basically for 18 months around the Games,” Hall said. “And so, adding on another level of stress and uncertainty . . .. that's the real piece, the uncertainty is really hard.”

The Paralympics are slated to start Aug. 24.

- With files from Donna Spencer in Calgary and Gregory Strong in Toronto.