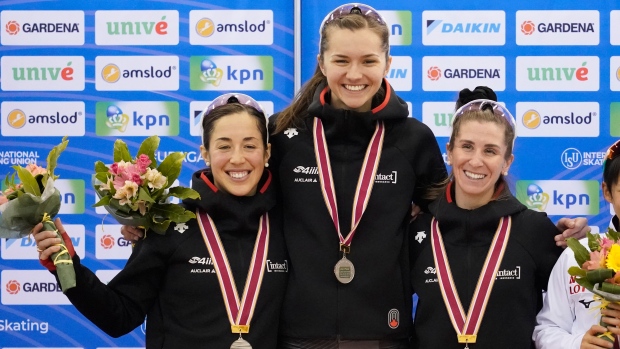 The medal also secured the Canadian team a first-place overall ranking in the World Cup standings for the event.

“With each team pursuit that we've done this year, we have worked to improve and I think today we put that into practice very well,” said Maltais. “There are still little details that we need to work on - like our start and making our exchanges a bit more synchronized - but overall we skated a very good race.

“We gave everything that we had today. We know that we aren't far behind the Japanese and we can already see that it's possible to beat them at the world championships.”

The team from Russia rounded out the podium, a distant third at more than six seconds slower than the winning pace.

The trio of Blondin, Weidemann and Maltais are the top ranked team in the World Cup standings, ahead of Russia and the Netherlands, having previously won one gold and one bronze medal this season.

The result improves on the Canadian team's ranking of third from last season.

Earlier Sunday, Laurent Dubreuil of Levis, Que., skated a time of 1:09.116 to earn a career best fourth-place result in the men's 1,000 metres. His previous high mark in the distance was seventh.

Calgary's Ted-Jan Bloemen was also fourth in the men's 5,000 metres with a time of 6:20.029, his highest finish of this World Cup season to date.

This report by The Canadian Press was first published Dec. 15, 2019.