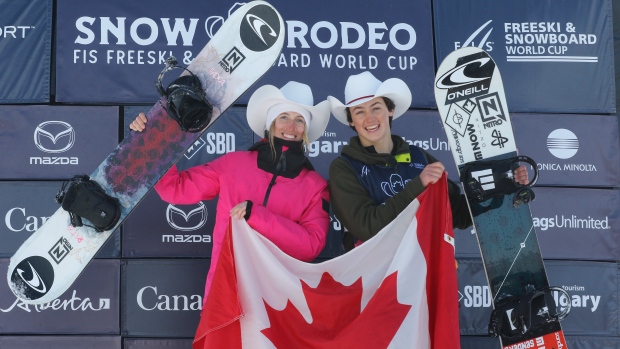 CALGARY - Laurie Blouin couldn't wipe the smile off her face after winning slopestyle gold at Canada Olympic Park on Sunday.

The 23-year-old snowboarder from Quebec City was happy that the FIS Freeski and Snowboard World Cup, which was billed as Snow Rodeo, was added to the schedule this season.

“I love it,” said Blouin, who scored 78.31 points on her first run. “I'm a country girl a little bit, so I like that it's called the Snow Rodeo. It's so nice that we have a World Cup in Canada. The last one was in Quebec and we're not going to have it anymore, so it's nice that there's an international contest in Canada.”

Even though she had already clinched top spot, she didn't hold back on her second trip down the hill and earned 79.56 points from the judges.

“First run, everything went well,” Blouin said. “I couldn't have done that run better, so I had to upgrade that last jump and I did. Yeah, I'm stoked that I just landed both runs. It's not too big of a course - it's not too big, not too mellow. It's just perfect and when it's sunny, it's so much fun to ride.”

Liam Brearley of Gravenhurst, Ont., won bronze in the men's final to round out a two-medal morning for Canada.

With one race to go this season, Blouin is sitting second in the women's slopestyle snowboarding standings with 2,200 points, just 400 behind Great Britain's Katie Ormerod, who finished third on Sunday thanks to her best run of 68.71 points.

Norway's Silje Norendal had a 75.68-point run on her first trip down the hill to finish in second place.

Toronto's Sommer Gendron, 18, scored 63.46 points on her first run and ended up in sixth spot, while Brooke Voight, 26, of Fort McMurray, Alta., placed seventh with 59.11 points.

Brearley, 16, had an impressive 76.58 first run before taking a hard face-forward fall after completing the last jump on his second attempt.

“Yeah, I just thought I had a lot more time and didn't make it around,” said Brearley, who knew he had to pull off a big trick to win gold. “I just wanted to try and do as well as I possibly could. It didn't work out, but it's all good.”

His best score still held up to earn him bronze behind New Zealand's Tiarn Collins and World Cup leader Ruki Tobita of Japan.

“This is a really cool event,” Brearley said. “I haven't been to this one before, but being in Calgary on the home turf is really cool. It's one of the bigger competitions that I've done and if I do well I'll probably get noticed.”

Collins was the lone competitor on the day to finish above 80 points as his 80.50 score won him the men's gold medal. Tobita wasn't able to better his score of 79.53 points on his first run and had to settle for silver.

Tyler Nicholson, 24, of North Bay, Ont., finished in eighth place after scoring 63.43 points on his first run, but he injured himself on his final jump and was loaded onto a stretcher and taken off the hill.

This report by The Canadian Press was first published Feb. 16, 2020.