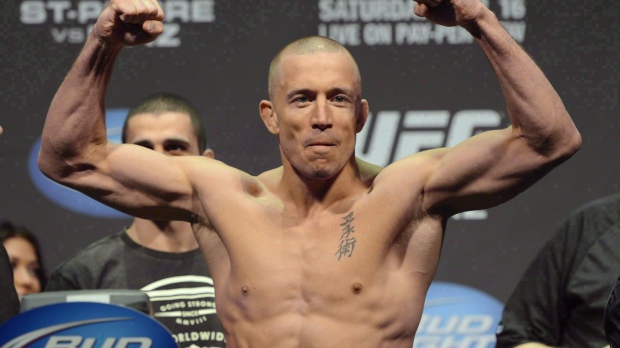 Fighter Georges St-Pierre flexes during the weight-in for UFC 158 in Montreal on March 15, 2013. Former welterweight champion St-Pierre says he will be bigger and better in his November comeback fight against middleweight title-holder Michael Bisping. THE CANADIAN PRESS/Ryan Remiorz

TORONTO -- UFC middleweight champion Michael Bisping did his best to try and get under the skin of Georges St-Pierre as the two hyped their UFC 217 main event.

At a news conference in the Hockey Hall of Fame, the brash Bisping made fun of GSP's French accent and said the former welterweight title-holder from Montreal was a boring fighter.

St-Pierre, meanwhile, promised the fight would not go the distance and that he would stop Bisping.

The two meet Nov. 4 at Madison Square Garden. It's the first fight for the 36-year-old St-Pierre since he stepped away from the sport in November 2013.

It marks the second 185-pound title defence for the 38-year-old Bisping, an English fighter now based in California.