In wake of MLS Cup final loss, Toronto looks to find another goal-scorer 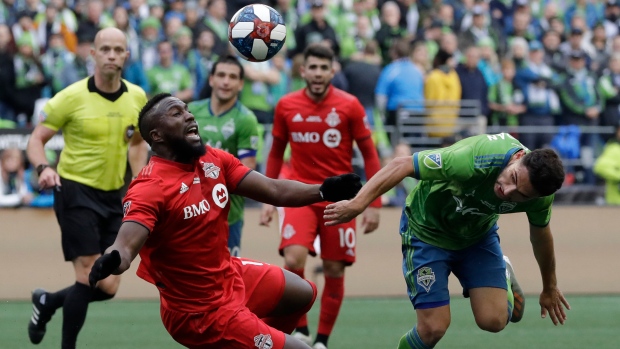 SEATTLE -- Toronto FC returned home to a snowstorm Monday, another unwelcome dose of reality after a painful 3-1 MLS Cup final defeat in Seattle.

The playing season is over. The planning begins.

Team president Bill Manning offered up one major target in a question-and-answer with season ticket-holders Oct. 19 on the eve of Toronto's opening playoff win over D.C. United.

After reeling off the club's depth in midfield, Manning said there was more roster work to be done.

"We still do miss that second goal-scorer. And that's something we're going to address in this winter (transfer) window," he said. "That's why I say we're not complete yet. I do think we still need one more window to further strengthen the team."

Citing the "cruel" penalty shootout loss to the Montreal Impact in the Canadian Championship final in September, Manning then returned to the issue of finding another scoring option to complement striker Jozy Altidore.

"That's one of the things we're finding is when the big guy (Altidore) doesn't score, we're in trouble, right," he said. "We had that combination with Sebastian (Giovinco) and Jozy in the past so that is something we're going to look at this off-season."

Altidore started the second leg of the Canadian Championship at BMO Field, a 1-0 win that led to a penalty shootout that did not go Toronto's way.

With Altidore sidelined by injury during the first three games of the playoffs, TFC survived by pushing Alejandro Pozuelo farther up front. The Spanish playmaker roved around the field, pulling defenders out of their comfort zone while creating space for others.

Pozuelo enjoys playing the position because of the freedom it afford him, as opposed to being stationed on the wing.

It worked for three games but not in the final. Pozuelo cut a frustrated figure in Seattle, often dropping back deeper in a bid to get the ball. And he started taking on one, two three defenders with success -- until another stopped him.

Coach Greg Vanney pointed to his team trying to do too much after going behind 1-0 in the 57th minute.

"Too much spinning around in midfield on the ball and not enough ball circulation."

Altidore came on as a substitute Sunday, scoring a consolation goal in stoppage time.

Pozuelo is a special player. But playing him consistently up front is like asking Gordon Ramsay to cook and wait tables. It's too much.

TFC did not have the guns needed in waiting. Patrick Mullins proved to be a hard-nosed reserve forward but not the alternative sniper needed.

With 57 goals during the regular season, Toronto ranked fifth in the league at 1.68 goals a game. It had an impressive 16 players score in the league, but Pozuelo (12), Altidore (11), Nick DeLeon (6) and Jonathan Osorio (five) accounted for nearly 60 per cent of the offence.

Scoring by committee is asking a lot when it comes to big games. Witness Sunday.

"By and large they executed many of their chances and that was the difference," coach Greg Vanney said of Seattle.

Despite having just 35 per cent of the possession, Seattle managed six shots on target, one more than Toronto.

"It's soccer. You work with what you have and unfortunately Jozy got injured just before the playoffs," Vanney said. "But I thought the rest of the group really stepped up. We looked at different ways to game-plan to try to be dangerous over the course of this playoffs ... It just meant we evolved. We became something different."

GM Ali Curtis has more on his to-do list as he looks to put his own stamp on a roster he inherited in January -- "with the house on fire" in Vanney's words -- given a spate of sudden roster changes.

With Pozuelo and Altidore locked up as designated players, the focus switches to captain Michael Bradley who currently is the third DP on an expiring contract.

One option is use targeted allocation money to re-sign Bradley, opening up a DP spot for a forward -- preferably young but not so young to be a project.

Teams can use TAM to convert a designated player to a non-DP. The maximum current salary for a TAM player is US$1.5 million -- a significant drop from Bradley's $6.5 million this season (second highest in the league).

The 32-year-old Bradley has always been committed to Toronto, both the team and city. And having already earned $39 million here, he may well be willing to do what's needed to keep the train rolling.

There are other numbers to address.

And once again, the team finds itself paying its backup goalkeeper more than the starter with former No. 1 Alex Bono earning $382,000 to Quentin Westberg's $115,254.

Fullback Richie Laryea has earned a raise from the league minimum of $56,250.

Vanney probably merits a raise too, given the roller-coaster year that started with the departure of GM Tim Bezbatchenko, Giovinco, Victor Vazquez and Gregory van der Wiel. Replacements took time.

"Our group has battled," he said. "It's been a season, in some ways, that's felt like two or three seasons all in one."

This report by The Canadian Press was first published Nov. 11, 2019.