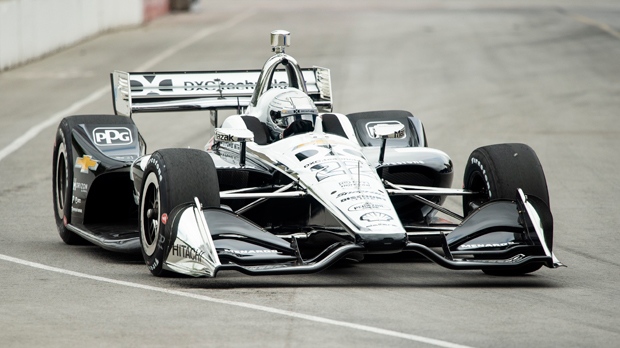 French racing driver Simon Pagenaud takes part in the first round of practice at the Honda Indy in Toronto, on Friday, July 12, 2019. THE CANADIAN PRESS/Andrew Lahodynskyj

TORONTO -- The past seven weeks for Simon Pagenaud have been part basking in the heady afterglow of his Indianapolis 500 win, and part itching for another victory.

"At this point I feel like May was great, but I've got other mountains I want to climb, and I want a second championship," the Frenchman said. "Yeah, it's time to go."

That second victory could come Sunday.

Pagenaud will start from the pole in the Honda Indy Toronto, recording a time of 58.4293 seconds in Saturday's qualifying session on the 2.89-kilometre, 11-turn street course that winds around Exhibition Place on Toronto's lakefront.

It's the 12th pole of his career, and second this season -- he started from the pole en route to winning the Indy in May, a thrilling victory the 35-year-old called a "life-changing event." He's never won in Toronto, finishing second here last year.

"It has been eluding me here," he said. "I've always been really fast here . . . we certainly have way more pace this year than we did last year. I'm going to attack (Sunday)."

Pagenaud is third in the IndyCar Series standings, with seven races remaining.

"This is the end of the championship, it's time to be aggressive, time to pounce on the table, quite frankly, and I've got to mark my territory," he said. "So I'm going to go out and drive hard, and I can't control the outcome, so we'll just see what happens."

The Frenchman and his Team Penske Chevrolet have been a tear in Toronto. He clocked the fastest practice time Friday then followed it up with the fastest lap time in Saturday morning's practice session.

He then won the pole by edging out defending Toronto Indy and reigning series champion Scott Dixon, whose quickest lap was 58.5948.

The New Zealander pushing hard on his final lap and spun out through Turn 11 in a wild finish.

"Yeah, that was the pole lap right there, man," Dixon said.

Had Dixon been penalized for his mishap, he would have lost his quick lap time and been bumped down the grid.

"Luckily we were in some pretty clear air there behind, as well, that the next car was actually going to have to pit," said Dixon. "So yeah, super lucky. It could have been sixth instead of second."

Felix Rosenqvist clocked 58.6793 in the qualifying which ended moments before a fierce storm rolled through the city, sending fans racing for cover.

"We've got a long race (Sunday), and we'll do what we can to make our way to the front," Hinchcliffe said. "This series, it's tough to move forward at all, we have such a talented field. With such a short lap, there's not a lot of corners to make a gain on other guys.

"(But) we've had really good Sundays, really good car on race days so far this year, so I'm confident we can pick off some of these guys."

Hinchcliffe has never won in Toronto, but has two third-place finishes in the past four years. He's attempting to become the first Canadian to win at home since Toronto's Paul Tracy stood atop the podium in 2003. Tracy also won in 1993.

He'll have the crowd on his side Sunday in Canada's lone IndyCar Series stop.

"That's what great about this event and the Canadian fans," Hinchcliffe said. "They support you through thick and thin and that's why I love coming home. I want to give them something to cheer for coming from 14th place. So we'll try to get a fair way up the grid tomorrow."

The morning session was marred by a wild scuffle between an angry Takuma Sato and Sebastien Bourdais after the Frenchman passed him on the last lap of the morning session. Video showed Sato confronting Bourdais in his pit box, and grabbing him by the collar. The Frenchman shoved Sato away before punches were thrown. The drivers were quickly separated.