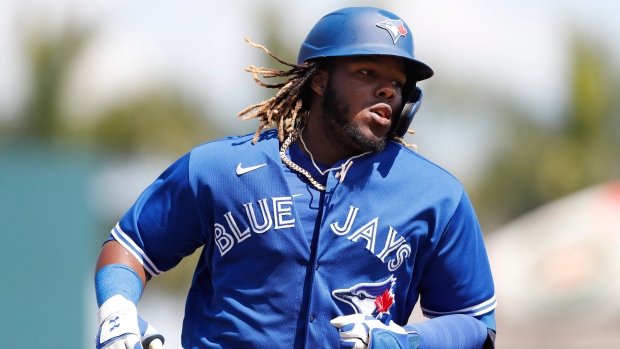 This off-season, he decided to do something about it.

Guerrero says he reported to spring training this year with improved mobility and stamina after shedding 42 pounds.

“I feel quicker on all aspects of my game right now, Guerrero said through an interpreter on a video conference Wednesday. ”Running the bases, I feel great. Before I felt a lot of fatigue after taking 10 ground balls. Now, 50, 60 ground balls I'm feeling good.

“I'm feeling a lot quicker on everything, defensively and offensively.”

Guerrero said he focused on his lower body while getting ready for the 2021 season.

“I really wanted to trust my legs,” he said. “Before I couldn't trust them. I wasn't getting to ground balls. Now I feel really good getting to the balls.”

Considered the top prospect in baseball before he made his major-league debut on April 26, 2019, Guerrero had a solid rookie season at the plate batting .272 with 15 home runs and 69 runs batted in over 123 games.

He struggled with his defence at third base, however, with 17 errors in 96 games at the position. Guerrero was moved to a first-base platoon with Rowdy Tellez in the pandemic-shortened 2020 season, with Cavan Biggio taking over at third.

Guerrero acknowledged he lacked fitness in his two previous seasons, going so far as to apologize to his teammates for being out of shape at Toronto's 2020 summer camp.

“For the last couple years, I mean they knew I was coming here out of shape,” the 21-year-old Dominican said. “I didn't prepare myself very well, and I felt at that moment my teammates needed an apology from me.

“They accepted my apology, and right then they talked to me, they motivated me. 'You know what, it's in the past. Let's start getting ready. We know what you're capable of, let's move on.”'

His improved fitness has not been lost on Blue Jays manager Charlie Montoyo.

“I think he's going to end up being, in my opinion, one of the best hitters in baseball in time,” Montoyo said Wednesday. “I think just by being in shape, the way he looks right now, he's going to get there. I don't want to put that much pressure on him, but I really think that's what he can do.”

Guerrero said he was in touch with teammates Bo Bichette, Biggio and Lourdes Gurriel Jr. for motivation during his off-season fitness program. He was able to work out at times with Blue Jays outfielder Teoscar Hernandez while in the Dominican Republic, where he played winter ball.

He said the weight loss happened gradually as a byproduct of his training.

“Actually, it was fun, it wasn't difficult,” he said. “Every day I was out there doing my routine with my trainers and working out in the field, and little by little I noticed I was losing sizes on my clothes, so I started getting happy about that.

“That really helped me out to keep going.”

Montoyo said Guerrero will primarily play first base again in 2021, but will get some opportunities to be at the hot corner.

“Our main message was become a Gold-Glover first baseman and then we'll move you to third and see how it goes,” he said.

“I'm feeling comfortable mentally, physically, so I'm ready to play wherever the team needs me to win.”