Jeremy Lin does his homework before making successful Raptors debut 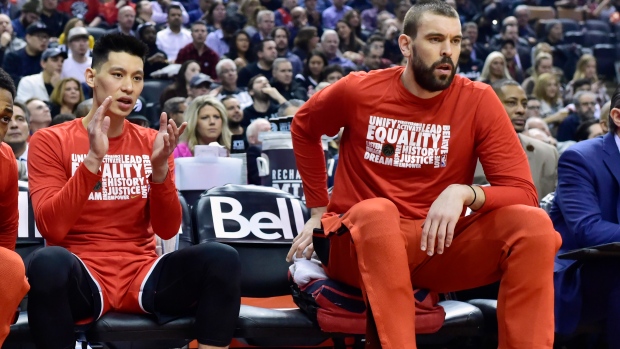 Toronto Raptors guard Jeremy Lin, left, and centre Marc Gasol look on from the bench during first half NBA basketball action against the Washington Wizards in Toronto on Wednesday, February 13, 2019. THE CANADIAN PRESS/Frank Gunn

The nine-year-veteran did his homework in advance of his Toronto debut Wednesday night against the Washington Wizards. It showed in the unlikeliest of places -- the player introductions.

Fans who have seen the Raptors live have witnessed Kyle Lowry's entrance -- a complex, seemingly ever-changing routine that would not look out of place in a Cirque du Soleil show. Raptors players hit the floor as the all-star point guard, showing some diva-like moves, gyrates his way past, exchanging a series of low-fives.

On Wednesday, despite touching down in Toronto just hours before tip-off, Lin fitted in seamlessly after getting warned by "all my friends" about Lowry's signature intro.

Lin made a beeline for Raptor Danny Green, whom he played with back in the day in the then-D-League (now G-League), to get some intel.

"I went up to Danny when I got here and said 'Hey, you need to tell me what's going on."'

Player intro job done, Lin went out and collected eight points, five assists and five rebounds in 25 minutes off the bench. He received a standing ovation when he entered the game some four minutes in.

"Every time I come to Toronto, it's always felt like a home game ... It doesn't matter what team I've played for," he told a packed media room after the 129-120 win.

Lin spoke to the media in English before answering question in Mandarin.

While California-born, Lin's Asian roots have made him a worldwide star sparking what was once dubbed "Linsanity."

How can the Raptors attract more Chinese fans, coach Nick Nurse was asked.

"I think getting Jeremy's a good start," he answered, "I think everybody should be excited to see him and I think they are.

"From my standpoint I like him as a player. He's a veteran, he's a great person, he's smart and he's got a really cool history. It's always great to know a player's history and it's really fascinating the things that he's done ... I think it's cool for the city."

Lin is also a timely acquisition, given backup point guard Fred VanVleet is expected to be out at least three weeks after thumb surgery.

While Nurse is happy to have Lin on his side, so undoubtedly are his corporate bosses at Maple Leafs Sports & Entertainment. MLSE says there are some four million Raptors fans on a Chinese social network called Weibo, with three million of those active.

Lin is a magnet to those fans.

"I'm very proud to represent Asian people on a global platform and a global scale," he said.

It wasn't always that way, he acknowledged.

"I was like 'Talk about my basketball.' But now people have seen I can play, I belong in the NBA. And I've really embraced just being able to represent Asians and to do that the right way hopefully and do my best with it."

He says he was jaded after the New York experience in 2011-12, when Linsanity really took off. But a long injury layoff later in his career helped change his mind, as he noticed his Asian following never wavered.

"Every year I go over to Asia and I can't even walk through the airport. It's insane," he said.

"There's something about Canada. They love basketball," he said.

"Everybody is extremely nice, it's just different," he added. "Again every time I've played here it's been unbelievable and an unbelievable reception."

He wanted to find a new home that fit him as a basketball player. "But for it to be here is definitely a bonus."

It's also a plus that the 43-16 Raptors look to do some post-season damage. Lin has been to the playoffs four times and never made it past the first round.