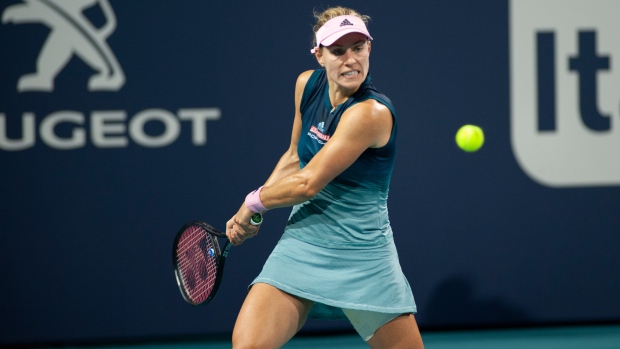 MIAMI, Canada - In stark contrast to some immediate post-match hard feelings, Germany's Angelique Kerber sent a congratulatory message to Bianca Andreescu on Sunday after the Canadian teenager beat her in the third round of the Miami Open.

Andreescu, who also beat Kerber last weekend to win the BNP Paribas Open, posted a 6-4, 4-6, 6-1 victory at Hard Rock Stadium in a match that started late Saturday night and didn't end until about 1:30 a.m. Eastern Time.

“Biggest drama queen ever,” Kerber muttered to Andreescu before a quick handshake at the net.

It wasn't clear what had upset Kerber. However, the three-time Grand Slam champion tried a more sporting approach in a post on Twitter later Sunday morning.

“Tough battle out there last night â†•miamiopen! Congrats to Bianca â†•Bandreescu- for a great performance and a well deserved win,” Kerber said in a tweet, complete with a thumbs up emoji.

Andreescu, an 18-year-old from Mississauga, Ont., took a medical timeout after seven games to receive treatment on her right arm. The trainer returned on two other occasions to work on the arm and shoulder area.