Kyrgios barks, mocks his way to Australian Open's 3rd round 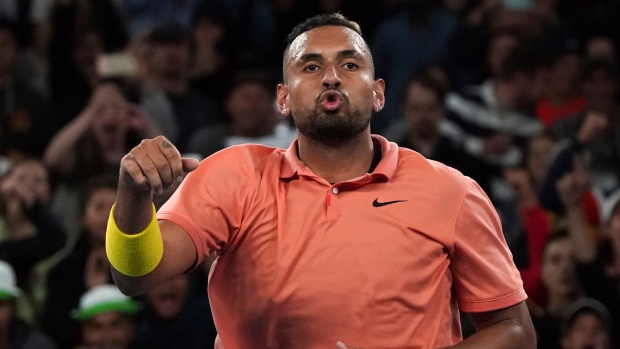 Love him or hate him -- and make no mistake, there are plenty in each camp -- Nick Kyrgios never allows for a dull moment when he's on a tennis court, whether it's shot selection, showmanship, momentum swings, barking at his entourage or mocking another player not even involved in the match at hand.

All of the above happened during his ever-eventful 6-2, 6-4, 4-6, 7-5 victory over Gilles Simon in the Australian Open's second round Thursday night.

That included a moment when Kyrgios poked fun at the man he might meet in the fourth round, Rafael Nadal. After being warned for taking more than the allotted 25 seconds between serves, Kyrgios mimicked the way Nadal fidgets before a point, as if to remind the chair umpire that there are folks who more egregiously waste time.

About the only boring segment of the proceedings came during the post-match interview, when an allusion was made to later rounds and Kyrgios, an Australian seeded 23rd, told the Melbourne Arena crowd, "I'm not thinking ahead. ... I'm just taking it one match at a time at the moment."

When Kyrgios wrapped up, the No. 1-seeded Nadal was early in the second set of his match over at Rod Laver Arena against Federico Delbonis.

Those results were going to be the most intriguing aspects of Day 4 of the year's first Grand Slam tournament, especially given the distaste Kyrgios and Nadal have for each other in a raucous rivalry that provided one of the highlights of Wimbledon in 2019.

Never too early to begin pondering a meeting with a quarterfinal berth at stake during Week 2 in Melbourne, with the popular Nadal facing the home-backed Kyrgios.