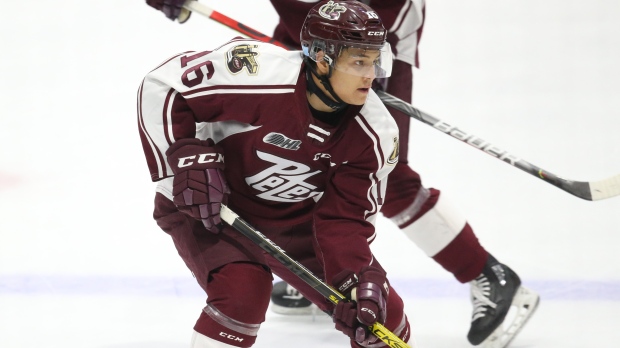 Nick Robertson of the Peterborough Petes is seen in this undated handout photo. Forward Nick Robertson started the season on fire and is showing no sign of slowing down with a league-best 19 goals in 17 games. THE CANADIAN PRESS/HO, Luke Durda, OHL Images *MANDATORY CREDIT*

Growing up in the suburbs of Detroit while Babcock coached the Red Wings, Robertson had an easy conversation starter.

“Not exactly neighbours but I trick-or-treated at his house,” said the 18-year-old.

“I knew he lived in the area. When I was drafted I mentioned it to him and we talked a little bit about the city of Northville and the hockey around it.”

Robertson was the Leafs' top pick in the 2019 NHL draft, taken in the second round 53rd overall, after Toronto traded its first-round pick in January to the L.A. Kings in the Jake Muzzin deal. But he's opened the 2019-20 Ontario Hockey League season by outproducing the majority of the junior players selected ahead of him and could become a steal if his play continues.

The five-foot-nine, 164-pound Robertson, a quick skater that likes to have the puck on his stick, began the year with at least one goal in eight straight games and has 28 points in 17 contests. Heading into Friday he was tied with L.A. Kings prospect Arthur Kaliyev of the Hamilton Bulldogs for the OHL lead with 19 goals.

The left-handed winger also had a strong showing in the summer at Leafs rookie and training camp, impressing the organization enough to sign him to a three-year entry-level contract in September.

Robertson says having the support of Toronto general manager Kyle Dubas helped to motivate him when he returned to Peterborough for his third season of junior.

“I think after the signing there's some pressure and expectations but I had a lot of confidence after that too,” said Robertson. “I'm just shooting the puck more, feeling more comfortable on the ice with two years under my belt.”

Robertson stays in regular contact with Toronto's development team while with the Petes and is listening to their advice.

“Stick to what I'm good at but get better off the ice, mature a little bit, way I carry myself,” Robertson says was the message at the beginning of the season. “I'm not a kid anymore. I'm an adult and they're paying you to do what they want and they have expectations. You have to keep that in perspective.

“They want to make sure everything is going right. I like that contact and I think it helps me.”

Robertson is thriving on a line this season with Semyon Der-Arguchinstev, another Leafs prospect selected 76th by Toronto in 2018.

The duo were originally paired together last season and formed a friendship that includes off-ice activities like going out for dinner and playing ping-pong.

Der-Arguchinstev, primarily a play-maker, has three goals and 22 assists in 15 games this season and has set up on 13 of Robertson's 19 goals.

Late in October, the Russian-born centre sprung Robertson while shorthanded for a hat-trick goal in a lopsided win over the Steelheads, then came to Robertson's aid when a Mississauga player took exception to the goal and shoved his teammate after the play.

“We have a lot of chemistry on and off the ice,” said Robertson. “Last year played together and obviously he got draftedâ€¦ Hard not to put us together.”

Robertson's older brother Jason tore up the OHL last season and is currently in the Dallas Stars organization.

The two were born in California and moved to Michigan in 2009 to continue their pursuit of hockey.

Robertson's father is a Michigan native and moved to the Los Angeles area to continue his career as a lawyer. That's where he met Robertson's mother, who is originally from the Philippines. They would split time between the two States for hockey reasons before eventually landing in the OHL.

Robertson says he has two main goals this season: winning an OHL title and making the American world junior team this December.

“Keep working hard and I think I have a good chance,” said Robertson, whose older brother played in the 2019 tournament.

“One (goal) is individual and one is team. Good for the resume next year.”