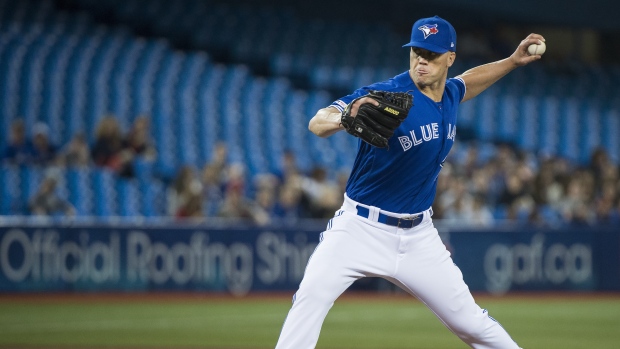 TORONTO -- The injury-depleted Toronto Blue Jays' rotation got a boost Thursday with the reinstatement of left-hander Clayton Richard from the 10-day injured list.

He was given the starting assignment for a matinee against the Boston Red Sox that will wrap up a four-game series at Rogers Centre.

"He's going to have 50 to 60 pitches," Blue Jays manager Charlie Montoyo said before the game. "His last bullpen (session) he looked really good so I'm expecting three or four good innings from him."

Starters Ryan Borucki (elbow), Clay Buchholz (shoulder) and Matt Shoemaker (knee) are all on the injured list along with reliever Ryan Tepera (elbow).

Veteran southpaw Ryan Feierabend could be called upon if Montoyo needs some long relief. The knuckleballer worked four innings last Saturday after his contract was selected from triple-A Buffalo.

Richard made only one minor-league start before getting the nod against the Red Sox. He was acquired from San Diego last December but started the season on the IL due to a right knee injury.

The 35-year-old left-hander was 7-11 with a 5.33 earned-run average last season over 27 starts with the Padres last year.

The Toronto bullpen has also been taxed of late, with five relievers playing in a 6-5, 13-inning loss to the Red Sox on Wednesday night.

"That's one thing I've learned from experience is you can never have enough pitching," Montoyo said. "Nobody expected three or four guys to get hurt. So it is what it is.

"We've just got to deal with it until we get healthy again."

To make room on the 25-man roster, the Blue Jays optioned right-hander Jimmy Cordero to Buffalo

He shouldered the loss Wednesday after giving up a solo homer to Michael Chavis in the 13th inning.