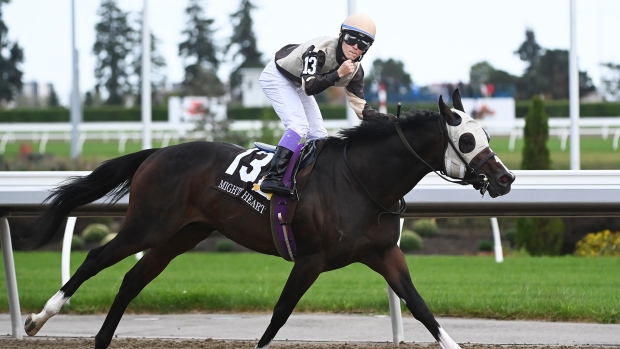 Mighty Heart with jockey Daisuke Fukumoto reacts after winning the running of the 161st Queen's Plate at Woodbine Racetrack in Toronto on Saturday, September 12, 2020. THE CANADIAN PRESS/Nathan Denette

TORONTO - Daisuke Fukumoto and Mighty Heart ran away with the $1-million Queen's Plate on Saturday.

Fukumoto took his one-eyed mount to the lead from the start, then surged to a stunning 7 1/2-length victory in the opening leg of the OLG Canadian Triple Crown at Woodbine Racetrack. Mighty Heart, a 13/1 longshot, lost an eye in a paddock accident with his mother as a foal.

But Fukumoto, who hit the winner's circle in his first-ever appearance in this race, said going to the lead from the start wasn't his original plan.

“He was very sharp so I just let him go,” Fukumoto said. “ I tried to calm (him) a little bit but after the wire he kept going, he didn't stop there.

What was surprising, though, was those two finished ahead of Carroll's other horse in the race, Curlin's Voyage. Canada's champion two-year-old filly and '20 Woodbine Oaks winner broke from the No. 10 post as the 9/5 favourite but finished fifth.

“I'll tell you what I thought about (Mighty Heart) was if he got a good trip he'd run all day because this horse just doesn't pull up,” Carroll said. “Once he gets rolling he just rolls on.

“Certainly, the filly being the favourite and most accomplished I expected her to be the top horse in there. But I had confidence in the other two or they wouldn't have been in there.”

But Carroll admitted Fukumoto's race strategy caused her some concern.

“I was watching the fractions and I'm thinking, 'You're maybe going a little quick out there. Back it off a little,”' she said. “But the horse seemed to be running along pretty easily.

“This is becoming a serious horse . . . everything is coming together for him and I think he's going places.”

Mighty Heart recorded his second win in five career starts - all this year. The $600,000 winner's share was almost six times as much as he'd won ($53,220) prior to Saturday's event.

But it was a definitely a most unusual Plate.

The race was originally scheduled to be run June 27 but was rescheduled due to the COVID-19 pandemic. It was run without fans in the stands.

Elizabeth Dowdeswell, the Lieutenant Governor of Ontario, was in attendance and presented the Queen's Plate trophy to Mighty Heart's connections afterwards. Queen Elizabeth II is patron of the Plate but last attended in 2010.

The Plate dates back to 1860 and is North America's longest, continuously run stakes event. It's also the opening jewel of Canada's Triple Crown but is much more than just a horse race.

Woodbine stages a festival around the event that includes outdoor concerts and a variety of social functions. The race has traditionally also had a fashionable flair with many men and women in attendance donning sharp suits or tuxedos with tails and top hats or elegant dresses and lavish headwear.

The usually jam-packed parking lots around the track were empty. The usual roar of the crowd at both the start of the race and especially at the finish, was replaced by an eerie silence.

Ditto for the pari-mutuel betting booths, which stood empty minus the usual lineups of eager bettors hoping to cash in.

“It was a very different day,” said Carroll. “I'd say it was a little calmer because we didn't have the big crowds in the paddock and things that rile the horses up so much so it was a much quieter day.

“We missed the fans, though. There's nothing like that moment when your horse is coming back after winning and the fans are applauding and honouring that moment, that performance. That's one of the most moving things for me so we did miss that.”

“I think in this instance it was probably a good thing,” she said. “He can be a little flighty until he gets used to things so it may have benefited him.”

“He trained really well on the dirt in New Orleans over the winter,” Carroll said. “I guess my biggest question is coming back that quickly.

“This year that race (Prince of Wales) comes back awfully quick. You hate to do the wrong thing by a horse that's just ran his eyeballs out.”