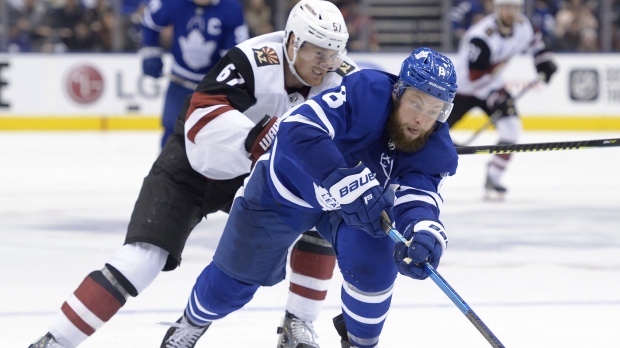 TORONTO - The Toronto Maple Leafs have suffered another blow on defence with the loss of Jake Muzzin to a broken hand.

The Leafs announced Wednesday that Muzzin will be out for about four weeks after suffering the injury during a win over the Tampa Bay Lightning on Tuesday.

The Leafs have recalled defenceman Calle Rosen from the American Hockey League's Toronto Marlies to fill the roster spot. Rosen, back for his second stint in Toronto, was acquired in a trade with the Colorado Avalanche on Monday.

Muzzin, 31, signed a four-year contract extension with an average annual value of just over US$5.6 million Monday.

The native of Woodstock, Ont., has six goals and 17 assists in 53 games with the Leafs this season.

The Leafs (34-23-8) are two points ahead of the Florida Panthers (33-24-6), who have a game in hand, in the race for the third in final playoff spot in the Atlantic Division.

The two teams square off Thursday night in Sunrise, Fla.

This report by The Canadian Press was first published Feb. 26, 2020.