TORONTO -- The Leafs' playoff road will start in Boston in a matchup of teams that have both seen better days this season.

The Bruins lost 4-2 to the visiting Ottawa Senators on Sunday night in a game postponed by the Boston bombings.

The loss means the Montreal Canadiens (29-14-5, 63 points) win the Northeast Division and finish second behind Pittsburgh in the Eastern Conference. Boston (28-14-6, 62 points) finishes fourth in the East, five points head of the Toronto Maple Leafs (26-17-5, 57 points).

The result means No. 1 Pittsburgh will play the eighth-seeded Islanders, No. 2 Montreal meets No. 7 Ottawa, No. 3 Washington takes on the No. 6 Rangers and No. 4 Boston faces No. 5 Toronto in the East.

Had Boston beaten Ottawa, Toronto would have faced Montreal in the first round.

It's the first Boston-Toronto playoff series since 1974 when the Bruins, who eventually lost to the Philadelphia Flyers in the Stanley Cup final, swept the Leafs in the first round.

Both teams have lost more than they have won recently.

The Bruins enter the playoffs having lost seven of their last nine outings (including one loss in overtime and another in a shootout). They have also had little rest -- Sunday's game was their sixth in eight nights.

The Leafs have lost four of their last six, during which they have been outshot 213-135 and outscored 20-15.

Ahead of Toronto's regular-season finale, coach Randy Carlyle was asked to assess his squad heading into the playoffs.

"We know we can compete with good teams if we play our game to our level," he said. "When we stray away from it, we're very very ordinary or less than ordinary."

Toronto was less than ordinary Saturday night in a sluggish 4-1 loss to the visiting Canadiens. It was a flat, error-riddled performance the Leafs can't wait to put behind them.

"The mindset now is to move on," said defenceman Mark Fraser. "Thankfully, we're in a position where we can."

Boston has held the upper hand recently against Toronto.

The Bruins won all six meetings against Toronto last season, outscoring the Leafs 36-10. The one-sided series included 7-0 and 8-0 defeats.

Boston won three of four against Toronto this year.

"We were getting pretty sick and tired of it so I'm glad we changed that tonight," Toronto centre Nazem Kadri after the most recent win.

The Bruins-Leafs rivalry has been upped by the 2009 trade that saw sniper Phil Kessel go to Toronto in exchange for two first-round draft picks that produced Tyler Seguin and defenceman Dougie Hamilton and a second-rounder (Jared Knight).

Tuukka Rask, acquired from Toronto for Andrew Raycroft in 2006, is the Bruins No. 1 goalie.

The Leafs were given the day off Sunday, possibly to avoid media questions about a playoff opponent that had not been decided yet. Or perhaps to help rid themselves of the taste of their sour Saturday night performance.

Carlyle is also aware of the need to rest his players even if -- as he noted prior to the Habs' game -- they had a relatively relaxing schedule during a Florida road trip earlier in the week.

"You cannot expect your players to give you 110 per cent if they're not 100 per cent rested," he said after a 35-minute practice Friday. "They have to have rest and nutrition."

The absence of first-line centre Tyler Bozak (upper body injury) for the second game in a row is a concern. Toronto needs to up its attack.

Getting outshot has been a worrying trend of late. Toronto managed just one shot in the second period against the Canadiens.

There are more questions than answers as Toronto prepares for the post-season for the first time in nine years.

"I was mystified tonight," Carlyle said in the aftermath of Saturday's loss. 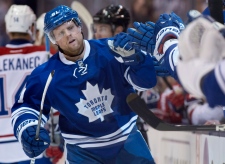