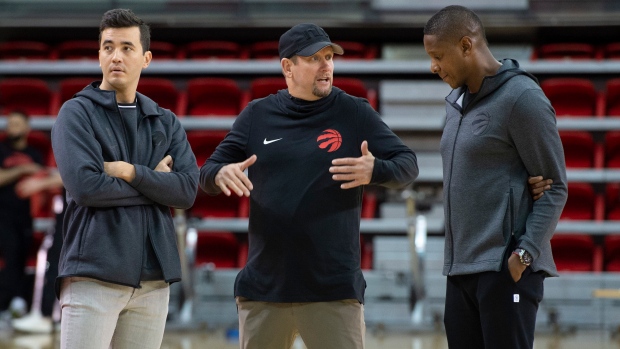 Toronto Raptors president Masai Ujiri has hosted a couple of virtual tours from the NBA bubble at Walt Disney World.

He first took viewers on a walk through the Raptors' hotel floor that was plastered in “We The North” banners and a massive mural of the Toronto skyline. In the second, he gave a virtual tour of the main arena, one of three that began hosting scrimmages on Wednesday.

“This is where the NBA Final is going to be, hopefully we're here,” Ujiri told viewers.

When the Raptors departed for Florida almost a month ago, they packed for four months. The reigning NBA champions prepared to be in it for the long haul. And part of their efforts of making it feel like business as usual, both Ujiri and GM Bobby Webster are living the bubble life with their players - perhaps the only NBA team that has two senior executives there.

Webster said the decision was an easy one.

“I think more than anything, it's just being part of this team . . . you know how close we are and what we want to build here and what we feel we have built here,” Webster said on Thursday's Zoom call with reporters. “We're in this together, they know they obviously have our full support, just experiencing this with them I feel is invaluable.”

The Raptors will play their first game in 137 days on Friday when they take on Houston in their first of three scrimmages. The real restart tips off next Thursday with the first seeding-round games. The Raptors open their eight-game seeding round two days later against the Los Angeles Lakers.

In these unprecedented times, arenas will be empty other than the players, coaches, officials and broadcasters.

“I know they're in our hearts and we're in their hearts, I know the support is going to be there 100 per cent,” he said. “Hopefully we can give them some sort of joy through this.”

“Think about it, them making the sacrifice to be here with the team, being away from their families and their kids and their wives just to support us and help us finish the rest of this season with everything going on right now, the pandemic, the Black Lives Matter movement,” McCaw said. “They chose to be here with us and support us and be with us every step of the way.”

Norman Powell appreciates that Ujiri and Webster are in constant communication with players, They inquire about their mental health. They ask what help they can offer in players' attempts to amplify the Black Lives Matter message.

“They've been really active in that and sitting in practice talking to the guys,” Powell said. “It's good to see those guys in practice and really interacting with everybody. We preach that it's a family organization, and you can really tell.”

A major theme of the NBA's restart has been amplifying social and racial justice messages. The Raptors have set the standard, rolling up to the Walt Disney World in two busses with “Black Lives Matter” written in white block letters. They unloaded their luggage dressed in Black Lives Matter shirts, and have practised in shirts with the same message.

Powell said he'd been unaware of the impressive black buses until they pulled up to the curb.

“It was really cool to walk out of the lobby and see those busses with Black Lives Matter out there. I really like that,” he said. “Those are the type of little things that show where we stand, and we're going to continue to take strides and steps forward and effect some real change.”

After losing NBA Finals MVP Kawhi Leonard in free agency last summer, few believed the Raptors had any hope of a strong season.

But despite losing key players to injury for big chunks of the season, the Raptors were second in the Eastern Conference when the league shut down March 11. They haven't played since a 101-92 win in Utah two days earlier.

No matter what happens in seeding round, the Raptors probably won't fall lower than third in the conference heading into the post-season. They can't wait to resume their title defence.

“We're excited,” Webster said. “You've heard from our guys. They can't wait to get out there, always have that chip on their shoulder, continue to prove everyone that doubted them. So I think this is just another great opportunity, obviously, adversity for everybody coming here and having to play here, but for our guys, just being at practice today, they're ready to go and finally play somebody else.”

Playing in front of an empty arena will be odd, although screens will be set up to display virtual crowds.

“When you have that competitive spirit and that competitive nature it doesn't matter if you are in front of 20,000 fans or if you are at the rec playing pickup with your friends playing pickup back home,” he said. “If you are a competitor you want to win and you see that even in the practices where we assimilate game play. It gets really competitive. Guys get after it. Guys get upset not willing to lose. So I think it's still going to be the same.”

The four-month layoff obviously pushed back several items on front-office to-do lists. Webster was asked about the contract status of Nick Nurse, who is due for an extension.

“Obviously he's done an incredible job for us, and those type of conversations are always top of mind for us and obviously we'll address them in due time,” Webster said.

The NBA draft, originally scheduled for June 25, has been postponed to Oct. 16. The Raptors have a first-round pick, and while they have a scouting staff back in Toronto, whether or not they'll be able to host any workouts north of the border for prospective players is still up in the air.

“I think we're all trying to figure out this new schedule. Obviously we can do a lot of stuff on-line,” Webster said. “We've talked to . . . probably 50 or 60 kids already so we're continuing to do our background, continuing to do our film work and I'm sure the NBA is working on it as well.”

This report by The Canadian Press was first published July 23, 2020.