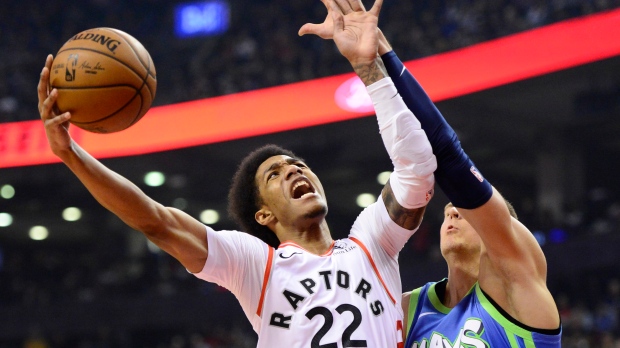 LAKE BUENA VISTA, Fla. - The Toronto Raptors will be without guard/forward Patrick McCaw for the foreseeable future as he seeks treatment for a reoccurrence of a benign mass on the back of his left knee.

The Raptors said in a statement Friday that McCaw will leave the NBA's campus at ESPN's Wide World of Sports complex near Orlando, Fla., and will be seen by Dr. Riley Williams at the Hospital for Special Surgery in New York to determine a course of action.

McCaw saw Williams for the same condition in November.

The Raptors said there is no timetable yet for McCaw's return, and added an update on his status will be provided when appropriate.

Toronto is not able to replace McCaw on the NBA's campus with another player, so the team's roster stands at 16.

McCaw appeared in 37 games for the Raptors this season, averaging 4.6 points, 2.3 rebounds and 2.1 assists in 24.5 minutes. The 24-year-old had not appeared in any of the Raptors games since the team relocated to the NBA's bubble, where the league is playing out the remainder of its season in isolation due to the COVID-19 pandemic.

Toronto had not lost a seeding game in the bubble heading into a game Friday against Boston.

This report by The Canadian Press was first published Aug. 7, 2020