Raptors will be without injured guard Kyle Lowry for Thunder rematch 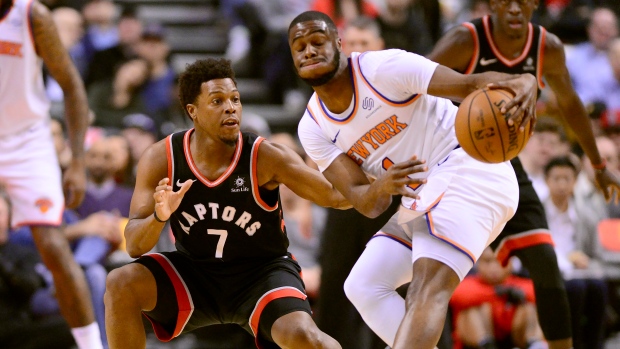 Toronto Raptors guard Kyle Lowry (7) and New York Knicks guard Emmanuel Mudiay (1) vie for control of a loose ball during first half NBA basketball action in Toronto, Monday, March 18, 2019. Kyle Lowry was ruled out of the Toronto Raptors' game Wednesday at Oklahoma City because of a sprained right ankle. THE CANADIAN PRESS/Frank Gunn

Lowry was injured in Toronto's 128-92 win over the Knicks on Monday night when New York rookie centre Mitchell Robinson fell on his ankle. Lowry, who had just returned after missing two games with a left ankle injury, had to be helped to the locker room.

He then missed Toronto's 132-114 overtime victory at Oklahoma City on Wednesday.