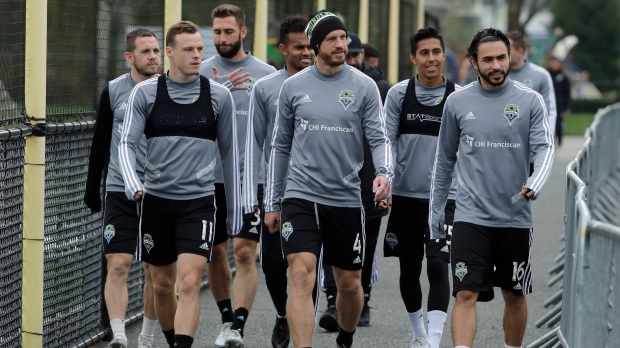 SEATTLE - Respect was the order of the day Thursday as the Seattle Sounders and Toronto FC met the media ahead of Sunday's MLS Cup final.

Seattle midfielder Cristian Roldan even confided he had a Michael Bradley jersey growing up.

“When we played them here this year I was extremely motivated, because that's someone I really look up to,” the 24-year-old Roldan said of the 32-year-old Toronto captain. “The way he carries himself. I've now seen it firsthand for a year and half, two years now (with the U.S. team). He's the ultimate professional, a true leader, a true captain.

“Any time I'm facing him, I want him to feel that I'm good enough to be on the same field as him. I've played alongside him and what a competitor he is. Any time I get to have a conversation with him, learn (from him), enjoy the moment that I have with him, is really a unique experience. I remember I had his jersey growing up, so it's going to be really fun to face him again.”

For his part, Bradley said there's “not much there” when it comes to Toronto-Seattle in the true sense of a derby. The two teams are 3,300 kilometres apart and have only met 16 times - including twice for the MLS title - over the years.

“But obviously when you have two teams that in the span of four years play each other in a final three times, then that starts to count for something for sure,” he said.

“The league had high expectations for choosing these cities to bring MLS clubs to. And here we are, playing the final in Seattle with two great clubs who have done so well these past 10 years. I think it speaks volumes to how much the league has grown and how well the clubs are run these days.”

Toronto, which entered the league in 2007, suffered through a string of down years before finally making the playoffs in 2015. Seattle has never missed the post-season since coming on board in 2009.

The teams meet for the MLS championship for their third time in four years. Seattle claimed the title via penalty shootout in 2016 while Toronto won 2-0 in 2017. Both games were at BMO Field. This time a sellout crowd of more than 69,000 is expected at CenturyLink Field.

The Sounders won the lone meeting between the two during the regular season, a 3-2 decision on April 13 in Seattle.

Seattle goalkeeper Stefan Frei, who played 82 league games for Toronto from 2009 to '13, was complimentary about the city and the organization.

“I look back fondly at my time in Toronto, to be honest,” he said. “I felt welcomed. The city was a good city - good people, great restaurants. Really (the) lifestyle is amazing in Toronto, I think the people are amazing there.

“Yes we had our struggles as a football team. But it was also nice to make history there and win the first Canadian (Championship in 2009).”

And he said the Toronto organization was always committed to the cause.

“The organization put so much money into that franchise. I mean going through so many coaches, a state-of-the-art training facility. These are things that cannot be overlooked and I think it ultimately got them to the success that they had.”

Seattle met the media first with Toronto arriving Thursday afternoon, escaping the snow of Toronto via charter to the Pacific Northwest.