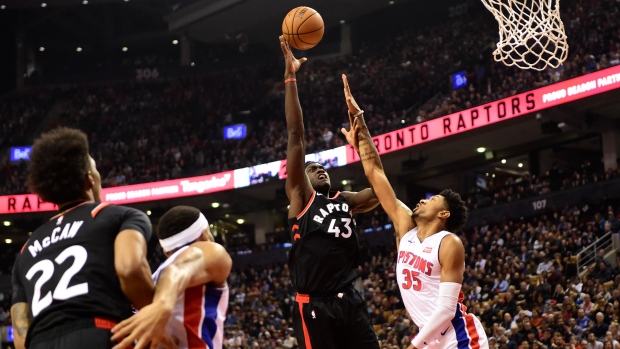 TORONTO - Pascal Siakam is feeling confident in his expanded role as a focal part of the Raptors offence.

The results are following.

Siakam scored 30 points Wednesday for the third time in five games, leading the Toronto Raptors to a 125-113 win over the Detroit Pistons.

“Feels good, I feel comfortable,” said Siakam, whose responsibility has increased this year in the wake of Kawhi Leonard's free-agent departure over the off-season. “I think the more and more I get into situations like that the more comfortable I get.

“Just having the coach trust me to have the ball in my hands ... it feels good and the more comfortable I'm going to get.”

Siakam also added five rebounds and five assists in 30 minutes as Toronto (4-1) built up a comfortable lead, then spent much of the fourth quarter on the bench as coach Nick Nurse rested most of his starters.

Fred Van Vleet had 13 points and 11 assists, Kyle Lowry had 20 points and Norm Powell and Serge Ibaka added 19 off the bench to help the Raptors earn their first win against former coach Dwane Casey.

Andre Drummond had 21 points and 22 boards to lead Detroit (2-3) and Derrick Rose poured in 16 points with 10 assists.

Siakam scored 19 points in a dominant third quarter that saw Toronto pull ahead by as many as 20 before ending the frame with a 101-85 lead.

The Raptors opened the third on an 8-0 run for a 13-point lead, and extended the advantage to 82-62 a few minutes later on a 10-0 run capped by a Siakam three-pointer. Siakam sank his third three of the game in the final seconds of the third.

“Didn't he just have (a stretch) the other night where he banged about five straight threes to start the game or something?” coach Nick Nurse said of Siakam's hot start to the season. “He made a variety of shots, (against) a bunch of different defenders. He's good and he's turning into a prime time scorer, right?

“That three ball is going to take him a long way.”

Siakam's three 30-point games are the most by an NBA player so far this season. He scored 30 or more points five times in 80 games last year.

“Every year he's been here with me and I've been watching him grow, it's just the confidence growing and understanding he can get anywhere on the floor he wants,” Lowry said of how he's seen Siakam improve. “He's just confident in what he's doing and what he worked on in the summertime.”

Wednesday's matchup marked Casey's first game in Toronto since the Raptors won the NBA Championship last June. Casey won all three games Detroit played against his old team last year in his first season as coach of the Pistons.

Casey was behind the bench when Siakam made his NBA debut in 2016. The Cameroon native played 55 games with the Raptors that season, starting 38 of them, and spent the rest of the year with Toronto's G-League affiliate.

Casey, Toronto's all-time leader in coaching victories (320) and winning percentage (.573), was fired by the Raptors in May 2018. He was honoured as the NBA's coach of the year in his final season in Toronto.

Casey received a warm ovation from the fans at Scotiabank Arena when he was announced as the Pistons coach before the game, and the Raptors played a video tribute for him during a timeout in the first quarter.

OG Anunoby ignited the crowd early with a pair of dunks in the first quarter and finished with 13 points.

This report by The Canadian Press was first published Oct. 30, 2019.