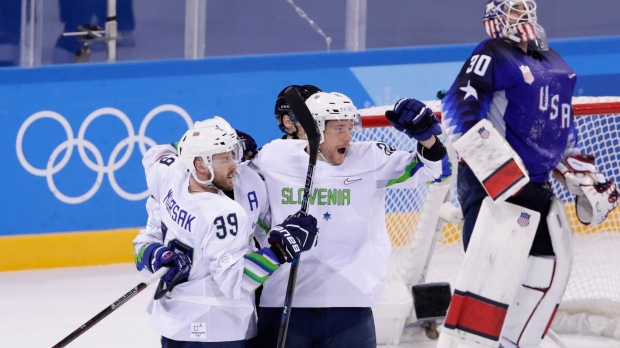 Jan Urbas (26), of Slovenia, celebrates with teammate Jan Mursak (39), as goaltender Ryan Zapolski (30), reacts after Mursak scored the game winning goal during the overtime period of the preliminary round of the men's hockey game at the 2018 Winter Olympics in Gangneung, South Korea, Wednesday, Feb. 14, 2018. Slovenia won 3-2. (AP Photo/Frank Franklin II)

GANGNEUNG, Korea, Republic Of -- Jan Mursak scored the tying goal in the final minutes of regulation and the winner in overtime as Slovenia came back to stun the United States 3-2 Wednesday night at Kwandong Hockey Centre in each team's Olympic opener.

Mursak, Slovenia's only player with NHL experience, scored with goaltender Gasper Kroselj pulled for the extra attacker with 1:37 left in the third period and scored the winner 38 seconds into overtime. As Mursak's shot went past goaltender Ryan Zapolski, U.S. players hung their heads on the bench before Slovenia players celebrated with their fans.

It wasn't the only surprise of the night, though the U.S. like all the other teams is playing without NHL players for the first time since 1994. Across town, the favoured Russians opened Olympic play with a 3-2 loss to Slovakia.

Zapolski allowed three goals on 25 shots, including the first goal by Jan Urbas. Kroselj stopped 34 of the 36 shots he faced to pick up the victory, giving up goals to Brian O'Neill and Jordan Greenway.

After a feeling-out period in the first few minutes and American defenceman Noah Welch sliding in front of a wide-open net for the save of the game, the U.S. began drawing penalties with its speed and then found a way to cash in. Forward Garrett Roe flew down the left wing and dished the puck to a waiting O'Neill to give the U.S. a 1-0 lead 17:44 in.

Kroselj made a handful of quality saves to keep Slovenia in the game, and Zapolski had to do the same in the second period, stopping Urbas on a one-timer with Greenway in the box and the U.S. on the penalty kill.

Greenway, who was noticeably frustrated when he was denied on a point-blank chance early, made up for it with a heads-up play that made it 2-0. Defenceman Bobby Sanguinetti's initial shot pinballed off O'Neill in front and Greenway sped to the net to put home the rebound 12:57 into the second.

The U.S. doubled up Slovenia in shots after two but couldn't pull away and increase its margin of error. It became razor thin 5:49 into the third when Gregorc beat Zapolski to get Slovenia on the board.

With captain Brian Gionta off for tripping, the U.S. got a couple of scares when Slovenia hit the post early on the power play and then almost scored moments later. With 1:37 left, Mursak scored from in front when playing 6-on-5. That goal forced overtime, where Slovenia continued to ride its momentum.

NOTES: Defencemen Matt Gilroy and Noah Welch wore the "As" as alternate captains. ... Brandon Maxwell backed up Zapolski as veteran goalie David Leggio was scratched along with forward Chad Kolarik and defenceman Will Borgen. ... The attendance was announced as 3,348 at Kwandong Hockey Centre on the campus of Kwandong Catholic University.