Sundin on Leafs' struggles: 'You're very exposed in a market like Toronto' 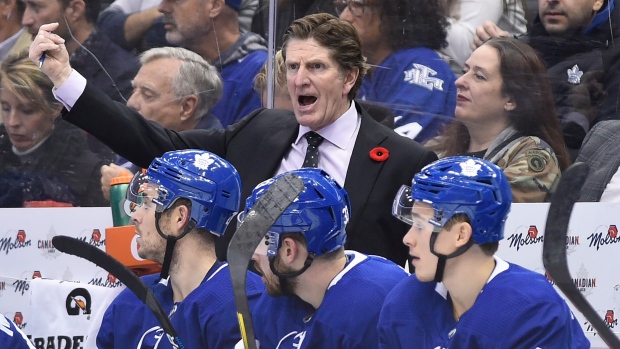 TORONTO - Mats Sundin knows what life's like when things are going well for the Maple Leafs.

Players feel as if they're on top of the world, seemingly unable to do any wrong.

But when the shoe's on the other foot - like it is for Toronto's current roster - there's also nowhere to hide.

“It's a lot of pressure to play here,” the club's former captain said Sunday afternoon. “It's extra attention for management, for players.

“All teams go through struggles every year, but you're very exposed in a market like Toronto.”

Standing not far from the Scotiabank Arena locker room he used to call home ahead of the Hockey Hall of Fame Legends Classic game, Sundin was asked about the struggling Leafs, who have lost five in a row, including Saturday's 6-1 drubbing at the hands of the Pittsburgh Penguins.

“If you have character guys ... you'll find a way,” said Sundin, who captained the Leafs for 11 seasons and owns the franchise record for goals and points. “You go through tough spurts in a season with all teams, but it's a little bit tougher (in Toronto).”

The Leafs came through an injury to captain John Tavares relatively unscathed, but are 0-4-1 since star winger Mitch Marner went down.

A group oozing with talent, Toronto has shown flashes of its potential only to be undone far too often by sloppy defensive structure and brain cramps at key times.

“That's just life playing here,” Wendel Clark, another former Leafs captain, said of the spotlight in hockey's biggest fishbowl. “The worst pressure is what everybody puts on themselves.

“You just play. The tighter your dressing room, the better a team you're going to have.”

Former Leafs winger Mike Gartner said he feels for the current roster - one that underwent a lot of off-season change.

“Things have just not gelled,” he said. “They're going to try and tune out all the chatter because at the end of the day they're the only ones that are going to be able to turn it around.

“If they can turn it around it can be something they can really build on.”

The Leafs will be looking to do that beginning Tuesday in Vegas against the Golden Knights in the second outing of a season-high six-game road trip.

“In Toronto things are at the extremes,” Gartner added. “Either people think you're way better than you are or way worse than you are.”

Sundin said getting on the road - the Leafs' first real stretch away from Toronto since training camp - should help.

Clark said playing in Toronto is hectic at the best of times. When the Leafs' are on a slide, it's impossible to escape the questions.

“Everybody's got answers,” he said with a laugh. “That's what makes it a great country to play the game in. Everybody does care, everyone's going to give their two cents.”

Former Leafs defenceman Larry Murphy, who became the target of angry fans during the team's struggles in the mid-1990s, said anything hockey-related gets magnified in Toronto.

“When things aren't going well and you're not meeting expectations, it's a miserable time,” he said. “Even in the best years you go through rough stages.

“Hopefully for the Leafs, they put the adversity behind them.”

READY FOR THE CALL

Carbonneau, meanwhile, won a trio of Stanley Cups and took home the Selke Trophy as the NHL's top defensive forward three times in his 18 seasons.

Sundin and Nicklas Lidstrom, the captains for the Legends Classic, both said they heard about Don Cherry's firing by Sportsnet for his comments on “Hockey Night in Canada” last weekend, which many viewed as criticism of immigrants for not wearing poppies ahead of Remembrance Day.

“What he said was wrong,” said Lidstrom, the former captain of the Detroit Red Wings. “It's not something I stand for.”

The Swedes added they were aware of Cherry's pointed criticism of Europeans during their playing days. “I never really thought about it,” Sundin said. “He's been such an icon in media and covering the National Hockey League for so many years. I have a lot of respect for the job he's done.”

Added Lidstrom: “We heard it, I heard it. I watched Coach's Corner over the years. I know what it was all about, but I didn't really care.”