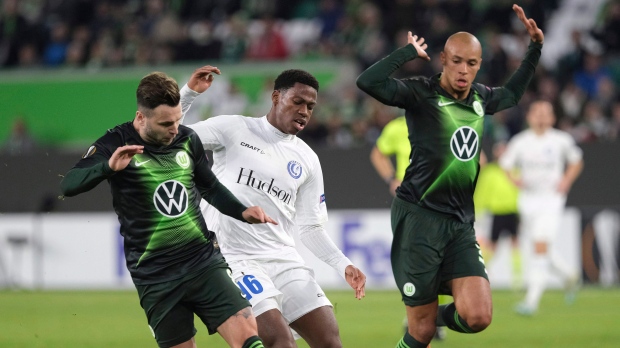 Wolfsburg's Renato Steffen, left, and Marcel Tisserand, battle for the ball with Gent's Jonathan David during the Europa League Group I soccer match between Vfl Wolfsburg and KAA Genk in Wolfsburg, Germany, Thursday, Nov. 7, 2019. Teenage forward Jonathan David, who has scored a Canadian-record 28 goals for club and country this year, has been named Canadian Player of the Year. THE CANADIAN PRESS/Peter Steffen/dpa via AP

TORONTO - Teenage forward Jonathan David, who has scored a Canadian-record 28 goals for club and country this year, has been named Canadian Player of the Year.

The Canadian Soccer Association, which administers the award, says the 19-year-old from Ottawa is Canada's highest-scoring men's forward in a single year over the past 20 years.

“Jonathan David is a great role model for young players because humility and talent is always a great combination,” Canada coach John Herdman said in a statement Wednesday. “He's always made himself available to represent his country and he has delivered with performances and goals. We are proud to have Jonathan David as one of our own and pleased his hard work has received recognition.”

Canada Soccer will name its female player of the year on Thursday.

David set a Canadian men's record with eight international goals in 2019, including a Canada record six goals at the CONCACAF Gold Cup where he was a tournament all-star and Golden Boot winner.

In all, David has 11 goals in 12 appearances for the national team since making his debut in September 2018 in an 8-0 CONCACAF Nations League qualifying game against the U.S. Virgin Islands.

Today the teen is well on his way to catching the retired De Rosario, who holds the Canadian men's career record with 22 goals (from 81 appearances).

At the club level, David scored 20 goals and added 12 assists in the first 11 months of the year across league and cup competitions.

Born in Brooklyn, David was three months old when his family moved to Haiti and was six years old when it came north to Ottawa. He played his youth soccer with the Gloucester Hornets and Ottawa Internationals.

A trial with KAA Gent came in 2017 after a scout saw him on video. He went to Belgium twice that year, spending time with the second team before earning a full-time invitation. After finishing high school in Ottawa, he returned to Europe to focus full time on his soccer.

David has shown the ability to be in the right place at the right time. He can find a crease in the defence and, when he gets the ball, knows what to do in front of goal. He can score with both feet or his head.

David says he grew up a striker but he is comfortable playing all across the frontline. KAA Gent plays in a 4-4-2 formation with a midfield diamond which has him playing behind the two forwards.