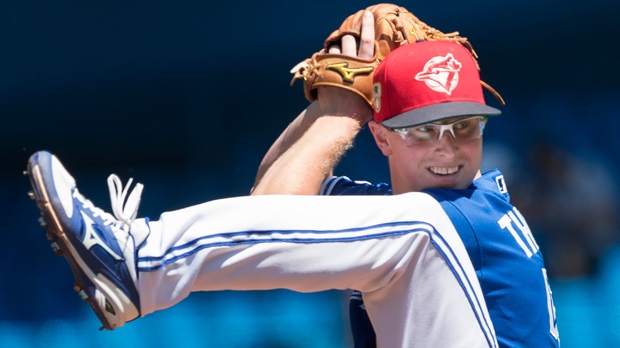 Thornton, 25, allowed just three hits and struck out five over an 89-pitch outing, bouncing back from the worst start of his young career last Tuesday when he gave up seven runs on 11 hits in 2 2/3 innings against the Boston Red Sox.

Teoscar Hernandez drove in a pair of runs for the Blue Jays (34-57), who snapped a three-game slide, and Danny Jansen and Rowdy Tellez added an RBI apiece.

Chance Sisco supplied the lone run for Baltimore (27-62), on a solo homer in the seventh inning off reliever David Phelps.

Asher Wojciechowski, a 2010 Toronto draft pick, shouldered the loss for the Orioles. He allowed three runs and four hits with three walks and six strikeouts over 4 1/3 innings.

The game was the last for both teams before the all-star break.

Thornton retired the Orioles in order in the first inning and then was spotted a 2-0 lead after Gurriel smashed a two-run homer into the second deck in left field. Toronto shortstop Freddy Galvis was aboard after he had drawn a one-out walk.

The Blue Jays increased their lead to 3-0 in the fourth inning and enjoyed a comfortable 6-0 margin after six innings.

Vladimir Guerrero Jr. led off the fourth with a double to right centre and scored on Jansen's double to left centre.

A single from Guerrero, a walk to Justin Smoak and a sacrifice fly from Jansen put runners on first and third with one out in the sixth inning. Tellez pushed Guerrero home with a double and Hernandez knocked in Smoak and Tellez with a single to left field.

The Blue Jays resume action after the all-star break with a three-game series against New York at Yankee Stadium, the start of a 10-game road trip that also takes them to Boston and Detroit.

Notes: Blue Jays reliever Ken Giles was named to the American League all-star team on Sunday as a replacement for the injured Marcus Stroman (left pectoral cramp) â€¦ Giles is seventh in the AL with 13 saves in 14 opportunities â€¦ Stroman was named to his first all-star game last Sunday â€¦ Toronto recalled pitcher Justin Shafer from the triple-A Buffalo Bisons and optioned outfielder Jonathan Davis to the Bisons on Sunday.