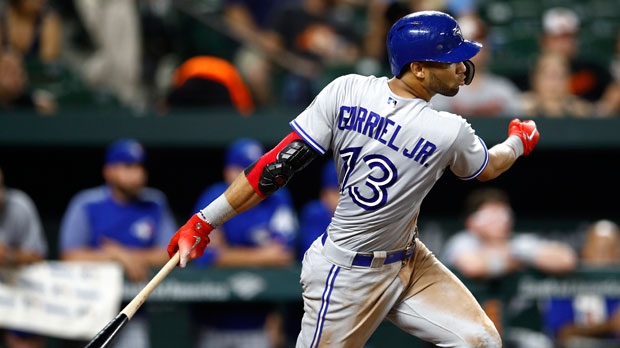 BALTIMORE -- The Orioles fell to the Toronto Blue Jays 6-4 Tuesday night, dropping their 108th game, a team record for losses since they arrived in Baltimore in 1954.

The Orioles led 4-2 in the seventh before a throwing error by third baseman Steve Wilkerson on a grounder by Teoscar Hernandez allowed two runs to score. Lourdes Gurriel Jr. followed with a two-RBI single off reliever Paul Fry that that gave Toronto a 6-4 lead.

Dylan Bundy (8-15) started strong for the Orioles before being lifted with two outs in the seventh as the game unraveled. He was charged with five runs (two earned), seven hits and six strikeouts. Bundy did not allow a home run for the first time since June 23, a span of 13 consecutive starts.

Cedric Mullins led off the first inning with his fourth home run for Baltimore.

The Blue Jays got on the board in the fifth on an RBI single by Dwight Smith Jr. A fielder's choice by Justin Smoak an inning later cut the margin to 4-2.

Orioles: RHP Alex Cobb (blister) threw off a mound, but there is no timetable for his return. RHP Andrew Cashner is making progress with his injured knee, but manager Buck Showalter was uncertain if he will be pitch again this season. "Obviously, they're both going to be with us next year and that will take precedent, to make sure that it's in the best interest of their health," Showalter said. . Rookie RHP Luis Ortiz (hamstring) will not pitch over the final two weeks.

Blue Jays: Marco Estrada (7-12, 5.75 ERA) wasn't scheduled to pitch until Thursday, but he threw only 55 pitches in his last outing against the Yankees, allowing eight runs and six hits.

Orioles: With several pitchers sidelined with injuries, Showalter is still mulling his options for a starter.