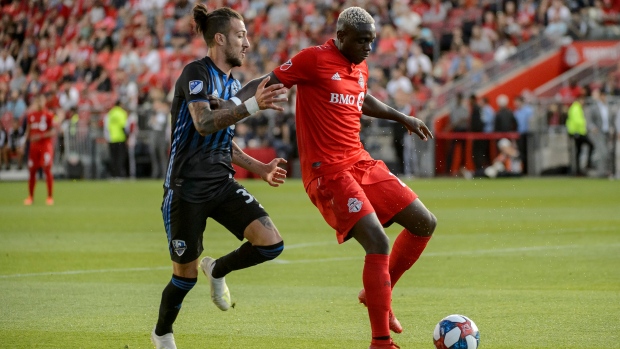 TORONTO - Justin Morrow finished off a pinpoint passing play to score in the 81st minute and give Toronto FC a critical 2-1 victory over the rival Montreal Impact on Saturday.

The win pushed TFC (10-10-7) past the Impact (10-14-4) and into the final playoff spot in the Eastern Conference. TFC has seven games remaining in the regular season, while Montreal has only six outings left.

Morrow converted a pass from Jozy Altidore inside the box on a play started by TFC captain Michael Bradley as the final whistle neared. Montreal goalkeeper Evan Bush got his arm on Morrow's shot along the ground, but the ball had enough steam to cross the goal line.

Marky Delgado scored his first of the season in the 63rd minute to draw TFC even. Bush punched the ball to Delgado outside the box, and his shot along the ground found its way in for the equalizer.

The teams failed to score in the first half. Former Barcelona forward Bojan Krkic scored a long-range goal early in the second half to give the visiting Impact a 1-0 lead.

It was the first goal for Krkic, signed earlier this month by the Impact, with his new club. He took the ball into the middle and beat TFC goalkeeper Quentin Westberg with a hooking shot to the left from outside the box.

TFC had a few chances to go ahead after its tying goal. But Altidore's header went high, Nicolas Benezet's shot from the six-yard box dribbled wide, and Bush stopped Bradley's shot from outside the box.

Alejandro Pozuelo, who has nine goals this season, did not start. But he replaced Nick DeLeon to begin the second half.

The Impact entered the game winless in their past three. After blowing a 3-0 lead to settle for a 3-3 draw with FC Dallas at home last Saturday, head coach Remi Garde was fired. Wilmer Cabrera was hired as Garde's replacement on Wednesday. So there wasn't much time for the new boss to make changes to the team's system.

Toronto head coach Greg Vanney employed newcomers Benezet and Erickson Gallardo as starters for the first time. It didn't take long for Benezet to make an impact. On a pass from DeLeon, Benezet's attempt in the 18th minute from in close went off the side of the Impact goal.

DeLeon had a chance of his own on a nice setup from Bradley in the 21st minute. But DeLeon's shot from outside the box went high and wide to the right.

The Impact failed to muster a scoring opportunity until the 30th minute when Ballou Tabla's shot sailed wide right.

This was the second instalment of the Highway 401 Derby this season. TFC blanked the Impact 2-0 in Montreal on July 13. The rivals will meet in a home-and-home for the Canadian Championship Voyageurs Cup final next month.