Toronto FC captain Michael Bradley to have ankle surgery, could be out 4 months 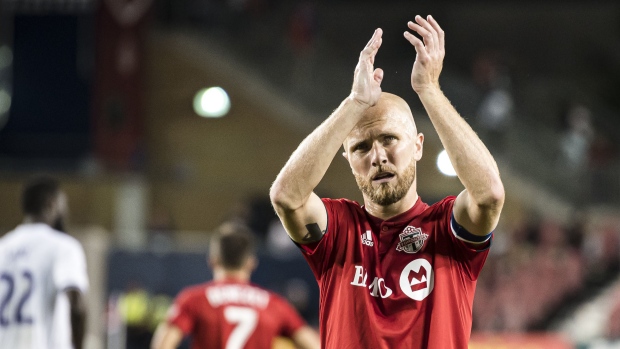 Toronto FC training camp opened with a bang Monday with the news that captain Michael Bradley is scheduled to undergo right ankle surgery and could be out for four months or more.

Adding to the unexpected drama was star striker Jozy Altidore, who said he thought the Bradley injury had been mishandled by the MLS club.

"Make no mistake. In my opinion, for me, it was handled poorly," Altidore told reporters minutes after GM Ali Curtis outlined the injury news. "This was an injury from two months ago and it's not the first time this has happened (at the club) ... For two months to have gone by and now he's having surgery and out 'til June."

Bradley was injured in the Nov. 10 MLS Cup final but at the time the issue was not said to be serious. On Monday, however, Curtis called the injury "very severe and complicated."

Bradley is slated to have the surgery Tuesday in New York City. Curtis, who called going under the knife "the last resort," put the recovery at approximately four months.

"In Michael's case, we are going to be careful and cautious about this," the GM told reporters. "But we're confident that once he has the surgery that he'll be able to return to play. It'll take probably approximately four months. Now that could be shorter or it could be lengthier depending on how we manage that process."

Bradley injured his ankle in the 32nd minute of the championship game when Seattle defender Roman Torres, attempting a shot, caught the Toronto player in the foot with his follow-through. Bradley finished the game but subsequently withdrew from the U.S. squad for CONCACAF Nations League games against Canada and Cuba just days later.

At the time, the TFC skipper said the ankle might take two to three weeks "to calm down."

The MLS Cup final represented Bradley's 200th appearance for Toronto FC in all competitions. A month later the 32-year-old midfielder signed a new deal with Toronto that covers three years plus a club option.

Players reported Saturday for medicals, arriving on a chilly weekend with a dump of snow. Monday was the first day training was open to the media.

Coaches and players depart Thursday for warm-weather training in Orlando through Jan de. 29. They then return home briefly before leaving Feb. 5 for Irvine, Calif., for the rest of training camp. They have five MLS pre-season games scheduled from Feb. 8 to 22.

The team opens the regular season Feb. 29 at the San Jose Earthquakes.

This report by The Canadian Press was first published Jan. 20, 2020.