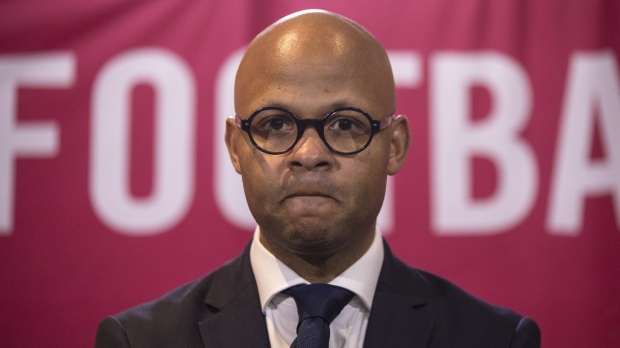 Toronto FC general manager Ali Curtis applauds the anti-racism words and actions that have made headlines around the globe in the wake of the death of George Floyd.

But he says more is needed - a plan to move forward and turn the momentum of speeches and rallies into actions that stick. The conversation is already underway with his players and Maple Leaf Sports and Entertainment, the MLS team's owner.

Not to mention his home, where he has two young kids.

“There's been a lot, I would say, that's been going on in my head the last few weeks. But also just my entire life,” said the 41-year-old GM, a former soccer star at Duke University drafted second overall in the 2001 MLS SuperDraft by the Tampa Bay Mutiny.

Born in Philadelphia, Curtis grew up in Ann Arbor, Mich., where his father earned his doctorate at the University of Michigan. His mother worked as a nurse.

Curtis was eight when someone called him the N-word on the school playground.

“That was an experience, one that I'll never forget,” he said.

There were plenty more, from watching the Rodney King beating on TV - Curtis was 12 at the time - to seeing statues that carry with them “really painful memories of slavery and discrimination.”

“Sometimes it takes generations to eradicate those things,” he said. “I wish we were in a better place or a different place, a more advanced place. And we have our work cut out for us.

“If we don't move forward, we're moving backwards,” he wrote. “We need to do more, we need programming. We need targeted, direct initiatives. We can't just fly the flag when it's convenient or have one month to celebrate history. It can't just be putting some powerful words on the captain's armbands, on someone's cleats or beneath the jersey. It's got be more. We have to do more.”

The words were taken from an address he made last week to an in-house MLSE town hall that also featured Raptors president Masai Ujiri, Argos GM Mike (Pinball) Clemons, equity advocate and MLSE LaunchPad partnerships co-ordinator Letecia Rose and others speaking on what was called “a day of reflection.”

Curtis says the horrific, unnecessary death of Floyd, with a policeman's knee on his neck, has changed him.

“I tweet more, I talk more. I've vowed that I will not be silent on this issue ... It's important that we talk about it.”

Curtis welcomed the recent shows of support in the Bundesliga by Americans Weston McKennie and Tyler Adams, England's Jadon Sancho and others in demanding for justice for Floyd.

“It's going to be super-important that people speak out on what's going on,” he said. “There's going to be a lot of different ways that we can address the problem. One of it will be at a very very grassroots level, having the strength and discipline that when you see something happening, you say something.”

Speaking out needs to be followed by concrete action, he added.

Like many, Curtis was taken by the powerful, emotional words of Killer Mike, an American rapper and activist who, in the wake of Floyd's death, urged his hometown of Atlanta not to riot, but “to plot, to plan, to strategize, to organize and to properly mobilize.”

Curtis points to the impact of the 381-day bus boycott in Montgomery, Ala., that started in December 1955 when African-Americans refused to ride city buses to protest segregated seating in the wake of Rosa Parks's arrest and fine for refusing to yield her seat to a white man.

Curtis is proud of how his players have responded in recent days.

“I'm glad our guys are having a voice and they have more than a willingness to want to be a part of the solution, and to support and engage.”

Last Friday, Curtis led a call on the issue with all the first-team players and coaching staff. Another call is planned for this week. The plan then is to create smaller worker groups, hopefully to come up with ways to help drive change.

“A lot of our players are showing their character in this moment. And they will be doing so for a long time because it's not who they are now, it's who they've always been.”

He is also proud of MLSE for speaking out, from players to board chairman Larry Tanenbaum. MLSE is currently looking to hire a director of inclusion and diversity.

For Curtis, who has a 10-year-old son and six-year-old daughter, there are also discussions at home - trying to prepare his kids, who are biracial, for the world they live in.

“These horrendous and horrible events have been taking place before they were born and throughout their entire life. Now it's much more visible. It's visible because of technology and it's visible because people are tired of the status quo.

“We're having to talk and deal with these things as a family. And that's really important.”

Like Toronto captain Michael Bradley, Curtis laments the lack of leadership in the U.S. over the last 3 1/2 years.

“There's been an absence of leadership as it pertains to racial equality, discrimination, police brutality in the United States ... It's disappointing, it's painful, it's hurtful. But that's the environment that we're in.”

But the protests around the world give him confidence in the future. He believes that backdrop will shine a spotlight on the U.S. elections in November.

“Such a beautiful place ... It's a diversity I've never seen before.”

He is not alone. Curtis was on a call earlier Monday that featured some powerful words from Raptors coach Nick Nurse.