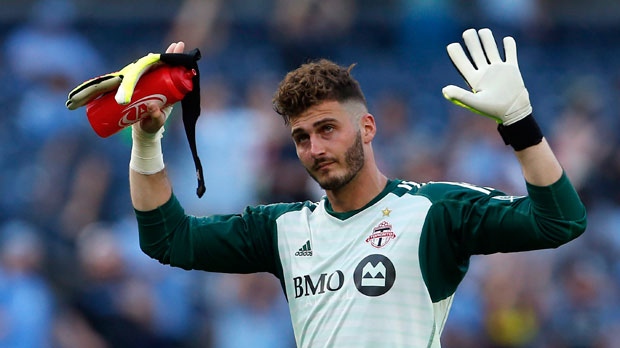 Defending is an 11-man responsibility so there is plenty of blame to share when your team is on pace for a franchise-worst 66 goals-against. But when you're the one constantly picking the ball out of the net, it takes a toll.

The 24-year-old Bono had 10 shutouts during Toronto's 2017 championship season, giving up a goal every 80 minutes during the regular season. That earned him a new, improved contract in June.

"His brightest years are still very much ahead of him," Toronto coach Greg Vanney said at the time.

This year, Bono has just three shutouts and has conceded a goal every 52 minutes in a nightmare regular season for the MLS champions. His goals-against average of 1.73 stands 16th in the league.

"I like to think of myself as a mentally strong individual, someone who gets over mistakes quickly," Bono said. "But thus far in my career, I'd never had a stretch where no matter what I did, no matter what I tried -- whether it be extra training reps or meditation or anything like that -- I felt like I wasn't in my own head. And then another mistake would happen."

There were obvious gaffes.

On July 1, a Kemar Lawrence shot from outside the penalty box went through traffic and then Bono in a 1-0 Red Bulls win in Toronto. TFC limited New York Red to just two shots on target and still lost.

There was a virtual repeat of that goal Aug. 12 in a 3-2 loss to visiting New York City FC. On Aug. 18, he spilled a Chris Wondolowski shot that turned into the equalizer in a 1-1 tie with San Jose.

There have been plenty of saves too, some after the Toronto defence has been torn apart. But Bono, usually a confident and athletic shot-stopper who goes by the nickname Bones, was struggling.

Vanney elected to sit his No. 1 in favour of backup Clint Irwin for games Aug. 29 at Portland and Sept. 1 against Los Angeles FC.

"I think that over the last handful of games or so I think Alex has made some very good saves but has also had some challenges over his stretch," Vanney said after the LAFC game. "The challenges for him have gotten to him a little bit mentally."

The decision came after a 3-1 win over Montreal on Aug. 25 that saw Bono beaten on an Ignacio Piatti attack that fortunately was called offside.

"For me that one was just the icing on the cake, that I can't take it any more, I need to do something to get myself out of it," said Bono.

Vanney stepped in at that point.

"Sometimes it's good to get knocked down a little bit like that so you have that period of reflection where you say 'OK, listen. We all know it's not good enough. And we all know what you're capable of."'

Initially he though he was just having a bad stretch. Then he talked to Vanney and they agreed a break was needed.

"And just try and find it within myself to say 'You've got this. You've done it before. There's no reason why you should be in your own head. This is the sport. Mistakes happen. You're going to dip in form every once in a while.' For me it's how you respond."

Bono had a long talk with teammate Jason Hernandez, a 14-year veteran who is an important sounding board on the team.

He also turned to his father.

Bono calls his dad before each game, often walking the field with phone in hand. He says his father would remind him to "let the game come to you."

"Play within yourself ... You don't have to play outside of who you are to help the team," said Bono. "For me, that's really what I have been focusing on. I feel like I kind of got away from that a little bit."

Vanney's decision to sit him came around an international break, during which he was with the U.S. national team. The change of scenery helped the reset.

"I feel since then I've been much closer to myself, still working my way back to that full confidence."

He is 1-1-0 in the league since the break and has made a conscious effort to enjoy the game, celebrating when Toronto scores or after making a save -- trying to smile more.

Bono says he feels a "million percent" better, close to being back to where he should be. Vanney also sees an improvement but says he's "still a work in progress."

"But he will find his way out of it and we will help him get out of it."

Irwin, a former No. 1 with no shortage of skills, has also taken his lumps behind an often makeshift Toronto defence. He has given up a goal every 33 minutes, albeit on a smaller sample size.

There is little place to hide when your team has given up 1.97 goals a game, 19th worst in the league.

Bono is expected to be back in goal Saturday when Toronto (8-15-6) hosts New England (8-10-11), knowing a loss or tie coupled with a Montreal win could end its playoff hopes.