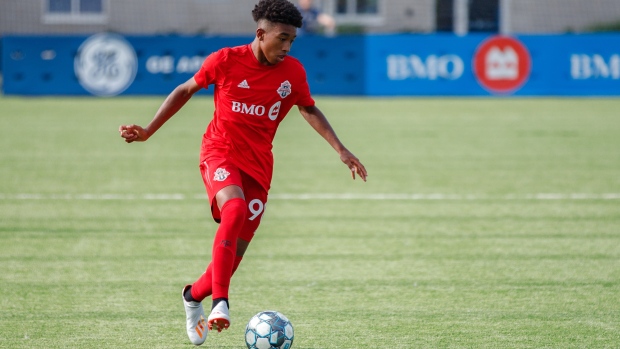 Toronto FC has signed 15-year-old midfielder Jahkeele Marshall-Rutty as a homegrown player, making him the youngest player ever to sign with the first team.

The native of Brampton, Ont., who turns 16 in June, is no stranger to setting records. He was 14 when he signed with Toronto FC 2 on Dec. 17, 2018, becoming the youngest player to sign with the reserve side.

Marshall-Rutty becomes the 22nd player in club history to sign for the first team from the Toronto academy. Prior to Marshall-Rutty, the youngest player to sign a first-team contract with Toronto was defender Doneil Henry who was 17 when he signed in 2010.

"Jahkeele is the top player in his age group across Canada and the U.S, and he is among the top young players in all of North America," GM Ali Curtis said in a statement. "He is an incredibly talented young man. While he's only 15 years old, he plays the game in very mature way. He had interest from many top clubs in Europe.

"It's important that we are both patient and aggressive with Jahkeele's development, but he has the potential to be an incredible player moving forward."

Marshall-Rutty made his pro debut for TFC 2 in the USL League One on June 28, 2019, coming on as a substitute against Forward Madison FC. He made three appearances with the club during the 2019 season.

He turned heads in April at the Generation Adidas Cup, scoring on a swerving shot from the outside of his boot in the final against Chivas de Guadalajara in the Under-15 GA Cup final. The goal was his fourth of the tournament following game-winners against Club Leon and Cruz Azul.

The five-foot-seven 141-pounder has represented Canada at the under-15 level.