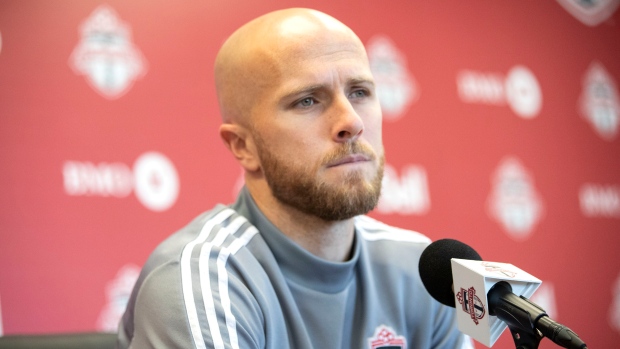 Toronto FC's Michael Bradley speaks to the media during an end of season availability in Toronto on Wednesday, November 13, 2019. THE CANADIAN PRESS/Chris Young

Toronto FC captain Michael Bradley has undergone successful ankle surgery in New York City with the MLS team confirming that the veteran midfielder will be out for four months.

O'Malley is the same surgeon who repaired Kevin Durant's ruptured Achilles, suffered in Game 5 of the NBA Finals against Toronto last June. O'Malley, who specializes in reconstructive surgery of the foot and ankle, is the Brooklyn Nets' team physician (orthopedics).

The four-month prognosis takes Bradley to mid-May, some 13 or 14 games into TFC's 34-match regular-season schedule.

Bradley was hurt at the Nov. 10 MLS Cup final in Seattle but finished the game and downplayed the injury, saying the right ankle might take two to three weeks “to calm down.”

On Monday, that prognosis stretched to four months with news that the injury had not responded to treatment and required surgery. That prompted star striker Jozy Altidore to rip into the team's handling of the injury.

“I don't think it's good enough,” Altidore said. “He's a guy that takes care of himself in an incredible way, an incredible professional ... I think he was let down.”

Bradley injured his ankle in the 32nd minute of the championship game when Seattle defender Roman Torres, attempting a shot, caught the Toronto player on the foot with his follow-through. Bradley subsequently withdrew from the U.S. squad for CONCACAF Nations League games against Canada and Cuba just days later.

He spent much of the off-season rehabbing the ankle at the club's training facility.