Emergence of Ibaka, bench good news for Raptors ahead of Game 5 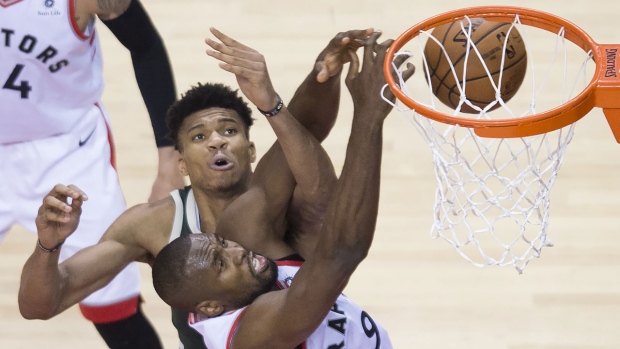 TORONTO -- Early in the second quarter Tuesday, Serge Ibaka got his hands on a rebound, threw down a monster dunk, then swung from the rim in dramatic fashion.

It was one of Ibaka's first baskets of the Raptors' series-tying rout of Milwaukee, and spoke of big things to come from the Congolese big man.

Ibaka scored 17 points and grabbed a game-high 13 rebounds off the bench in one of Toronto's best all-around games this post-season.

One of the storylines of this post-season is the disappearance of the beloved "Bench Mob," a big part of the Raptors' post-seasons in the past. Through much of two series, the bench was a liability.

But on a night that star Kawhi Leonard was hobbling, and the team's second option on offence Pascal Siakam was struggling, the second unit came up big.

Was Tuesday's emergence partly about pride?

"Oh yeah, we have to take it personal," Ibaka said, in Tuesday's post-game press conference. "We're here for a reason. And when we have a couple of games where we can't really play our best basketball, or we can't really help our team, we take that personally. Everybody.

"We come in the next day, we watch film, we stay on the court, we take extra shots. Just try to come back and better, like we did tonight."

Ibaka, wearing a black monogrammed baseball hat with his nickname "Mafuzzy," was in a jovial mood at the press conference, switching effortlessly to answer questions in English, French and Spanish. He joked with the media: "Anybody speak Italiano? Portuguese?"

There was plenty of reason to feel festive. The Raptors' 120-102 victory tied the Eastern Conference final series at two wins apiece. It's now best of three beginning Thursday at Milwaukee's Fiserv Forum. The Raptors are two games away from what would be the franchise's first appearance in the NBA Finals. Another big box ticked in a season of sky-high goals.

"This playoff so far, yes," he said. "Our team needs it from us, coming off the bench to bring some energy, and defensive intensity, and score some points to help our starting lineup. It was big-time for us (Tuesday)."

The Raptors arrived in Milwaukee on Wednesday having snatched the momentum back from the Bucks. Tuesday's rout was remarkable in that it came largely with Leonard moving at times like an old man. The player who missed all but nine games last season with a quadriceps injury was clearly hurting.

"Good, no concerns at this point, he's good," Nurse said.

Most of the Raptors, banged up from this post-season run -- particularly Sunday night's double overtime win -- stayed off the court on Wednesday.

"This is a resting and re-energizing part of the playoffs for us, really almost a full day off of the job outside of guys getting their treatments, few guys got some shots that wanted to stay sharp or get their workouts in, but mostly a recuperation day," Nurse said. "We know we've got a difficult challenge ahead of us, a difficult task and it's going to take everybody's rejuvenated energy and spirit to get the job done."

Toronto has never won a series after trailing 0-2. And it's only happened in the conference finals five times in NBA history. Ibaka was part of one those come-from-behind conference wins -- Oklahoma City came back to beat San Antonio in the West final in 2012.

Before Game 4, Ibaka and Nurse had mulled over offensive rebounds, one of the team's weak spots in previous games.

"We talked about it before the game," Nurse said. "I said 'Our transition defence has got to be great. Make good decisions. If you're going to go flying in there, you'd better have a chance to get your hands on it or at least tip it to keep it live.'

"So I think Serge was determined to get in there and fight for some position, and he looked really big and bouncy and strong, and he got his hands on a bunch of them."

The emergence of Norm Powell, who had 18 points Tuesday, and Fred VanVleet (13) is also good news for the Raptors, whose offensive output had stalled after Leonard, Lowry and Siakam.

"I think we're just playing for one another," Powell said. "We're staying confident in one another."

The series returns to Toronto for Game 6 on Saturday. A Game 7, if necessary would be back in Milwaukee on Monday.