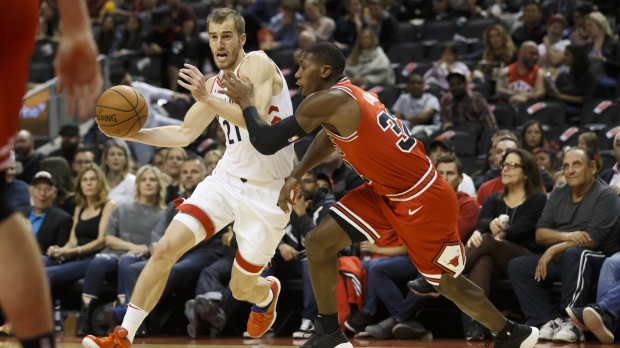 Toronto Raptors guard Matt Thomas (21) drives to the net on Chicago Bulls guard Kris Dunn (32) during the second half of their NBA basketball game in Toronto, Sunday, Oct. 13, 2019. THE CANADIAN PRESS/ Cole Burston

The rookie guard fractured his left middle finger during Saturday's 119-116 win at Atlanta. He'll be evaluated by a specialist on Tuesday.

“So we should know a little bit more about the timetable,” said coach Nick Nurse.

Kyle Lowry, who is out with a fractured thumb, and Serge Ibaka (ankle strain) were sidelined for the eighth consecutive game on Monday when the Raptors hosted the Philadelphia 76ers in a rematch of last season's thrilling Eastern Conference final.

“We don't want to lose anybody else,” Nurse said. “Seems like we got quite a few guys out, but on we go. On we go.”

Nurse had hoped Ibaka would be ready to play Monday, but said he likely won't see action now until Toronto hosts the Utah Jazz on Sunday.

This report by The Canadian Press was first published Nov. 25, 2019.