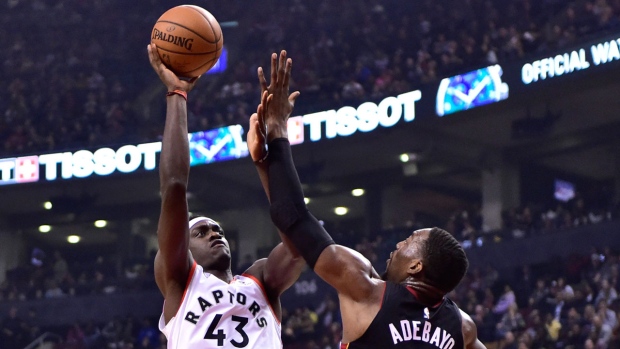 TORONTO -- A week before the Toronto Raptors tip off the much-anticipated NBA post-season, their strong finish Sunday against a desperate Miami team gave a glimpse of what playoff opponents might expect.

In Dwyane Wade's final appearance in Toronto, and against a Heat team scrapping for a playoff spot, the Raptors erased a double-digit deficit to beat Miami 117-109 in overtime on Sunday, in their final home game of the season.

"If we can keep that intensity up and communicate and rotate the way we did in that fourth and overtime, we'll be pretty tough to beat," said Danny Green, who had 21 points.

Pascal Siakam had 23 points and 10 rebounds, Norm Powell finished with 23 points on 7-for-7 shooting, and Kawhi Leonard had 22 for the Raptors (57-24), who have one game left -- Tuesday in Minnesota -- before the playoffs open next weekend.

Dwyane Wade led the Heat (38-41) with 21 points in his final trip to Toronto. The three-time NBA champion is retiring this off-season after 15 years in the league.

Leonard and Wade exchanged jerseys after the game.

"Just going through those championship series (when Leonard was with San Antonio) and facing him, and that Miami Heat team is the greatest team I have ever played," Leonard said. "Being that young and having to guard Wade and LeBron it got me to where I am today. Losing and then coming back and winning just helped me out, man. It's like I told him before, me going through that and them being as great as they are just made me a better player."

The Heat began the day in ninth in the East, one game behind Detroit for the eighth and final playoff spot, and it was obvious through the first three quarters who was the more desperate of the two teams.

Miami led by 13 points early on before the Raptors, who had beaten the Heat three times previously this season, closed to within a point -- 79-78 -- with one quarter to play.

The teams traded the lead numerous times down the stretch. Back-to-back threes and a pair of free throws by Leonard sent the game into the final minute all tied up. But Leonard's shot with 10 seconds to play bounced off the rim. A basket by Bam Adebayo at the buzzer was waved off.

Green scored the first five points of the extra period, and Siakam drilled a three-pointer from in front of Miami's bench that had the fans roaring. The three-pointer put Toronto up by seven points with 39 seconds to play and it was all but game over.

"The fact that we know that they're fighting for a playoff spot is a good challenge for us, preparing for the playoffs we couldn't ask for a better situation," Green said. "Coming into these last couple of games, this last week or so, going against teams who you know are giving it their all because they're trying to fight for a spot makes the game a little more interesting, a lot more fun to be in, and kind of like a small playoff-like atmosphere."

Raptors coach Nick Nurse said rather than resting players, he was leaning toward "playing these (last two games) out," in hopes of home-court in a potential NBA finals series against Golden State.

"I would have in other years thought maybe it would be time to rest some guys, but I just don't see any tiredness in my guys' face or legs or bodies, only because we've had a lot of guys miss 20 games, unfortunately at that time," Nurse said. "There's a few guys we're paring back a little bit, like Danny, but other than that we're gonna try to go play to win."

The Raptors, who locked up their post-season spot long ago, continue to wait to see who they'll play in the first round. Heading into Sunday's schedule of games, just a game-and-a-half separated No. 6 through 9 in the East -- Brooklyn, Orlando, Detroit and Miami.

Wade, meanwhile, received a standing ovation when he came off the bench in the first quarter. No. 3 Wade jerseys dotted the Scotiabank Arena crowd.

"It's tough," Wade said on the loss. "It's taking everything for me to be calm because these hurt. We're fighting, we're trying to get ourselves to the post-season."

When asked what coaching Wade has meant to him, Heat coach Eric Spoelstra said he "could go on for days."

"(He's meant) Everything. We basically broke into this at the same time. His rookie year was my first year on an NBA bench," Spoelstra said. "I love Dwyane. I wish this could last longer. But all great things must come to an end, and I absolutely respect that he's doing it on his own terms.

"I respect him for the Hall of Fame player that he is, but also because of who he is as a person, and as a father and husband and philanthropist. That's why he transcends the game and has such a global following."

The Raptors led briefly by six points in the first quarter, but the Heat closed the quarter with a 9-2 run to lead 26-25 to start the second.

Miami stretched their advantage to 13 points on a running layup by Dion Waiters midway through the second, and went into the halftime break up 57-50.