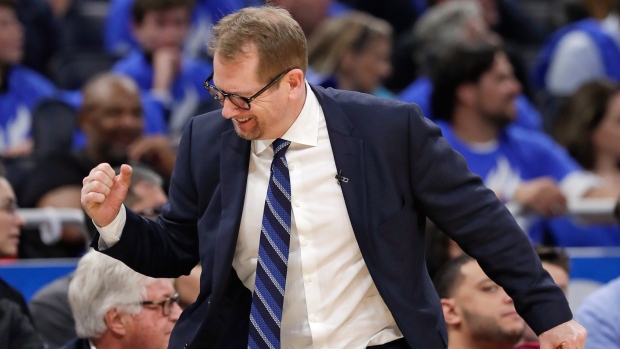 Toronto Raptors head coach Nick Nurse pumps his fist after his team scored a basket against the Orlando Magic during the second half in Game 3 of a first-round NBA basketball playoff series, Friday, April 19, 2019, in Orlando, Fla. (AP Photo/John Raoux)

DENVER - In response to an early call, Toronto coach Nick Nurse formed the perfect “O” with his mouth and held it for a dozen or so seconds.

Oh, these playoffs. They can leave your mouth agape - just like Nurse's gone-viral expression on the bench during a win Sunday in Orlando.

Now leading 3-1, Nurse and the Raptors look to close out their series with the Magic at home Tuesday. The same goes for Philadelphia against Brooklyn and Portland against Oklahoma City.

The second-seeded Denver Nuggets return home Tuesday following their first victory in San Antonio since 2012. Tied at 2, they've reclaimed home-court advantage as Nuggets coach Michael Malone finds himself in quite a chess match with his counterpart Gregg Popovich.

“He's Bobby Fischer,” Malone said, in comparing Popovich to the chess prodigy. “He's a savant. So I'm not worried about matching wits with Gregg Popovich. I'm worried about helping our team.”

Face it, this was comical: The look of Nurse, who instantly became a meme with his expression during a Game 4 win. After a 3-second call on Fred VanVleet in the opening quarter, Nurse stood almost perfectly still on the sideline, his mouth ajar.

Informed it erupted on social media, Nurse said: “Is that a good thing?”

Here's perhaps a not-so-good thing: Toronto's history in closing out series. The Raptors are 5-6 when they have a chance to win a playoff series, according to the team.

“This team, let's see if they can start their own history,” Nurse said. “We need to do our best to take care of business.”

It certainly was a wild weekend around the league, with Brooklyn GM Sean Marks drawing a one-game suspension - and a fine - for entering the referees' locker room after a Game 4 loss to Philadelphia on Saturday. In that game, Brooklyn's Jared Dudley and Philadelphia's Jimmy Butler were ejected after a scuffle broke out following Joel Embiid's flagrant foul against Jarrett Allen in the third quarter. The league fined Dudley $25,000 and Butler $15,000.

San Antonio guard DeMar DeRozan got hit in the wallet by the league, too, after tossing the basketball in the direction of an official following a called he didn't like in a Game 4 loss. Asked Monday at practice if there was anything he regrets about the incident besides the $25,000, DeRozan responded: “The 25-grand. I don't want to just give away that much money.”

The series between the Nuggets and Spurs has been highly entertaining, with each team earning a win on the other's home floor.

“Back at square one,” DeRozan said. “Got to go in there and win in a tough environment. It should be fun.”

Here's a look at Tuesday's games:

NEED TO KNOW: Unbelievable as this may sound, the Raptors have never won four consecutive post-season games. After Kawhi Leonard's 34-point outing in Game 4, Toronto now will have a chance to change that.

KEEP AN EYE ON: Orlando has been resilient all season, and Magic coach Steve Clifford thrives off that. There's a history of toughness from Orlando in the playoffs - the Magic are 5-4 in their last nine games when facing elimination. Clifford was an assistant coach for most of those Orlando teams.

INJURY WATCH: Magic C Nikola Vucevic was grabbing at his right ankle after tussling with Leonard for a loose ball late in Game 4. But neither team is likely to have any lineup changes for Game 5.

PRESSURE IS ON: Toronto. The Raptors should want to send a message, end this series, get a few days off and ensure themselves at least a full week at home before hitting the road for Game 3 of the second round.

NEED TO KNOW: Brooklyn guard D'Angelo Russell has 89 points through four games. That's tied for the second-most among Nets players whose first four career post-season games came with the team. He trails only Brook Lopez (90 points, 2013).

KEEP AN EYE ON: Nets guard Caris Levert. He's the first Nets guard to score 25 or more points in consecutive post-season games since Vince Carter in 2007.

PRESSURE IS ON: Philly forward Tobias Harris, who's hitting 50% of his 3-pointers in the post-season. This after draining 32.6% in the regular season after being acquired from the Los Angeles Clippers.

NEED TO KNOW: The Spurs hold a 22-8 post-season record against Denver. ...The Nuggets were an NBA-best 34-7 at home in the regular season.

KEEP AN EYE ON: Nuggets forward Torrey Craig. He got the start over Will Barton on Saturday and had 18 points. Also played stellar defence on DeRozan.

PRESSURE IS ON: Derrick White. The Colorado native/Spurs guard scored eight points in a home loss to the Nuggets on Saturday. Gary Harris was assigned to cover him after White erupted for 36 points the game before.

NEED TO KNOW: Portland is 82-42 all-time at home in the post-season.

KEEP AN EYE ON: The Blazers dynamic backcourt duo of Damian Lillard and CJ McCollum, who have combined for 51 or more points in every game of the series. McCollum and the Blazers quietly went about their business Sunday. They didn't talk trash, but let their play do the talking in a 111-98 win. “I think we are a lot more mature than we were in past years,” McCollum said on the Blazers' website.