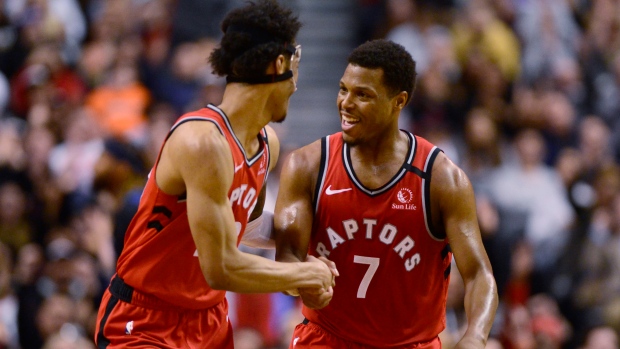 The win streak topped the Calgary Stampeders, who won 14 straight in 2016, for the longest single-season win streak from a major Canadian-based professional team (NBA, NHL, MLB and CFL).

Kyle Lowry, who was back after missing a game with whiplash, had 27 points and 11 assists for the Raptors (40-14), while OG Anunoby had 16 of his 25 points in the third quarter, and Fred VanVleet chipped in with 16.

Karl-Anthony Towns topped the Timberwolves (16-36) with 23 points, while D'Angelo Russell had 22 in his Minnesota debut.

Despite missing key players for major chunks of this streak - Marc Gasol (hamstring), Norman Powell (broken finger) and Serge Ibaka (illness) were all sidelined Monday - the Raptors continue to find ways to win.

Win No. 15 was a hard-fought victory that saw the Raptors finally take their first double-digit lead late in the third quarter. In a thrilling ending to the frame, Hollis-Jefferson stole the ball off Russell with 3.6 seconds left in the quarter and his dunk sent Toronto into the fourth with a 106-94 advantage. Hollis-Jefferson gestured to the Scotiabank Arena fans to cheer. They obliged.

James Johnson's three-pointer pulled the T'Wolves to within two points early in the second, but the Raptors responded and when VanVleet and Patrick McCaw connected from long distance on consecutive Toronto possessions, the Raptors went up by 11 points with 5:28 to play.

Lowry's three with 3:07 to play gave the Raptors a 19-point cushion and it was all but game over.

While the Raptors made no moves at last Thursday's trade deadline, the Timberwolves overhauled more than half their roster, sending away seven players - including Canadian Andrew Wiggins, who went to Golden State for Russell - and acquiring eight new ones in three separate deals.

The shakeup paid off immediately as the T'Wolves ended their 13-game skid with a 142-115 win over the Los Angeles Clippers on Saturday.

The Raptors' previous record win streak was 11 games, set twice (2016, 2018). Coach Nick Nurse said the streak, which is the best in the NBA, wasn't a focus with his players.

“There isn't a whole lot of conversation about it but I think everybody, it's pretty much front and centre on everything you see post-game . . . if you see anything across the bottom or on your app or on anything you're looking at, that's what they're talking about,” Nurse said. “But there's not a lot of in depth discussion about it.”

The league-leading Milwaukee Bucks won 18 in a row earlier this season.

The Raptors scored on their first eight shots to take a nine-point lead. They shot 69.6 per cent in the first quarter but Minnesota didn't miss many either, and Toronto led just 40-36 to start the second.

Russell's three-pointer midway through the second quarter capped a 21-7 Minnesota run that had them up by seven. They would go ahead by eight before Toronto closed the half with a 13-6 run of its own, pulling to within 75-74 at the break.

The Raptors play the Nets in Brooklyn on Wednesday in their final game before NBA All-Star weekend in Chicago. Lowry, Siakam and Nurse were all honoured before tipoff as Toronto's representation in Sunday's all-star game.

This report by The Canadian Press was first published Feb. 10, 2020.