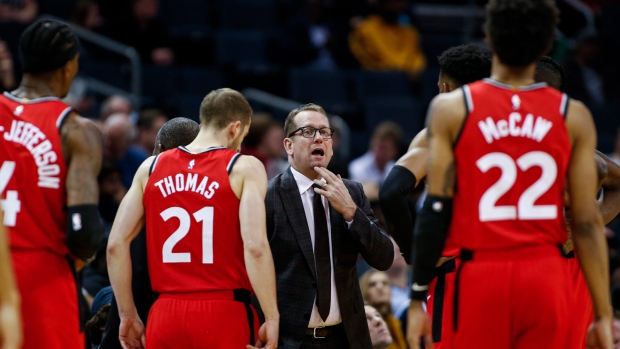 In this Jan. 8, 2020, file photo, Toronto Raptors coach Nick Nurse, center, gathers his team during a timeout in the first half of an NBA basketball game against the Charlotte Hornets in Charlotte, N.C. (AP Photo/Nell Redmond, File)

TORONTO - It's the longest pre-draft year in NBA history, stretching now into its 17th month.

So long, that for the first time in his NBA career, Patrick Engelbrecht is still scouting draft prospects while other leagues around the world have already tipped off their next season.

The Raptors director of global scouting said Toronto has compiled more information on potential picks than perhaps in any other time in history. But COVID-19 poses unique challenges in this bizarre year, and to some players more than others, and the Raptors are carefully taking all that into account.

“It's very strange,” Engelbrecht said. “There's some international prospects that we're actually watching the beginning of their season but yet they're in this year's draft.

“Each player has their own story. We have a dossier and a history with each guy that we're very serious about, so we look at each player through a different lens. It's his own journey, his own path, and you're watching his evolution and his trajectory differently than you would anybody else. But yeah, it's very unique. It's different.”

The Raptors have the 29th pick in the Nov. 18 draft, which has been rescheduled several times. The draft is normally held in late June.

But this isn't a normal year. And Engelbrecht, who's in his eighth season with the Raptors, said every draft prospect has been uniquely affected.

“Some guys, you're relying more on video. Some guys, you can get up close and personal with them, and obviously you'd love to do that,” he said.

“This pandemic has affected people in a lot of different ways and you need to be careful when you are judging young men going through a pandemic. Some may have gym access, some may not. Some may have an agent with resources to do X, Y, and Z and some may not. So you need to balance that stuff and figure out who will thrive in your environment and stick to the talent.”

The false backdrop for Engelbrecht's Zoom video call with the media on Monday was the Raptors' practice gym at OVO Athletic Centre in Toronto. While he was in a gym, he said, it wasn't that one. He's actually in the U.S., and while some states have stiffer travel restrictions - New York, he said, requires 14 days of quarantine if arriving by airplane - he's been able to watch workouts in some gyms in the west.

He added a lot of agencies have brought prospects out to go through the pre-draft process together as the draft approaches.

Still, nothing compares to running players through drills and game situations in their own gym in Toronto.

“When we have a guy in our building obviously they are on our turf,” Engelbrecht said. “They put on our practice uniform. They go through our paces. Our minor-league development coaches work them out, our head coach and assistant coaches are sitting courtside. There's a different level of, let's say, intensity in the gym when you are doing a workout in your own facility.”

The solo workouts are difficult to evaluate. There's no one for players to pace themselves with. They start missing shots, and “you are out there alone, and you can be out there drowning,” Engelbrecht said. “It's a unique thing. You are just focusing more on skill set and conditioning and their level of preparation for that moment.

“But in terms of competitive nature, who is going to push through a drill? Who is going to out-compete somebody else? . . . Those are things you are just not going to have a chance to see and you are going to have to rely more on your past scouting and in-game scouting you have done throughout the year.”

Next season poses numerous questions. There isn't a determined start date, although recent reports said the league is considering Dec. 22. Whether the Raptors can play at home is still up in the air.

Engelbrecht said players are back on the court, and there are pockets where scrimmages are happening in the U.S.

“Los Angeles is sort of like a summer training hub. I don't know if you can call this a summer, but in the last maybe three weeks there have been a lot of NBA players on the ground,” he said. “I've gone into gyms and seen our guys - OG (Anunoby), Norm (Powell), Pascal (Siakam) - they are back playing and working out. There is definitely some energy about when the season is going to start.”

This report by The Canadian Press was first published Nov. 2, 2020.