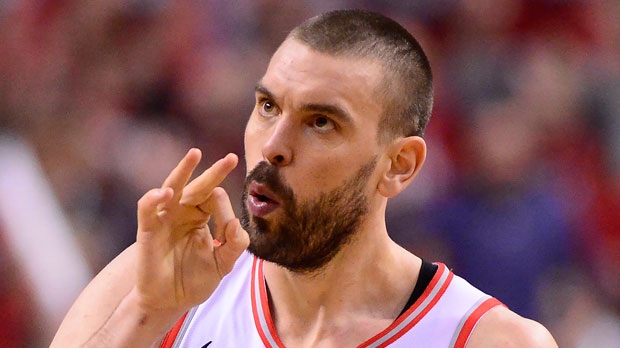 TORONTO -- Only a few weeks ago, Marc Gasol figured he was facing another long off-season, the star centre of a Memphis Grizzlies team out of the playoff picture for the second consecutive year.

Now the 34-year-old Spaniard is a key cog in a club gunning for a long playoff run.

Gasol, who was acquired in the February deal that sent Jonas Valanciunas to Memphis, grabbed four steals Tuesday as a big part of the Raptors' ball-hawking defence in a 111-82 rout of the Magic that tied the best-of-seven opening-round series at one win apiece.

"Obviously, very happy," Gasol said of his new job. "That's kind of the reason you play basketball, to compete at the highest level. Having a chance to do that makes you very happy."

The mood was light at practice the morning after their thorough dismantling of Orlando, with a playlist to match. "Earth, Wind & Fire" and "The Four Tops" provided a cheery soundtrack at the newly-renamed OVO Athletic Centre.

Raptors coach Nick Nurse speculated the mood was not nearly so light at Orlando's practice. He expects to face a team bent on revenge in Friday's Game 3.

"I would imagine they're extremely pissed off this morning," Nurse said. "And I imagine they're going to be pissed off for the next 48 hours until the ball goes up. That's playoff basketball. Can you not get too happy after a win? Can you understand how determined the team is going to be after a loss and bring the energy you need to bring?"

Playing at the Amway Center, where the Magic haven't lost since Feb. 22 -- a nine-game win streak -- the Raptors will need to match Tuesday's defensive effort that, particularly in the opening minutes, was as good as its ever been.

Toronto has thrown a lasso around Orlando's all-star centre Nikola Vucevic, rendering him ineffective in the post-season so far. Vucevic shot a woeful 3-for-14 in Game 1, and 3-for-7 in Game 2.

"Well, we've got two really good centres defensively, first of all," Nurse said of Gasol and Serge Ibaka. "They're, at times, as good as it gets, so it's nice to have two guys to be able to go at him throughout the course of the game. They played him physical. They limited his touches. Our perimeter ball pressure has limited his touches, as well."

The Raptors' assists have skyrocketed since Gasol was added in February. And a few times on Tuesday, Orlando left him alone on the perimeter and the NBA's defensive player of the year in 2013 knocked down three of his four three-point shots.

But Nurse reiterated that it's Gasol's smarts on the defensive end that can really impact a game.

"Marc is a really good defender, right? I think he's a combination of big, tough, smart and he's got some desire to want to stop you," Nurse said. "All those of things are pretty good ingredients for a defensive centre."

The Raptors will have some extra depth and energy on the bench on Friday with the expected return of Patrick McCaw. The 23-year-old shooting guard has been out since he sprained his right thumb on March 30.

"Of our perimeter defenders he ranks right up there with his length, speed, right?" Nurse said. "His desire to play it, both on the ball and off the ball, and that is a lot to offer, right? He's a really, really good defender, and that can only bolster that unit.

"We're going to be happy to have him back, we really like him as a player."

McCaw was with the Golden State Warriors for their 2017 and '18 championship runs, and even started three games. He said the mood around the Raptors is similar to post-season Warriors.

"It's the same, it's the same type of mentality, we have one goal in mind and that's making it to the NBA Finals, and you can feel it in the coaching staff and in the players, the mentality and the mindset coming into shootaround and practices and films, guys want it," McCaw said. "So, that's the mindset and that's what we're going to do."

Toronto's bench has been light with the absence of OG Anunoby, who's out indefinitely after undergoing an emergency appendectomy two days before the playoffs tipped off.