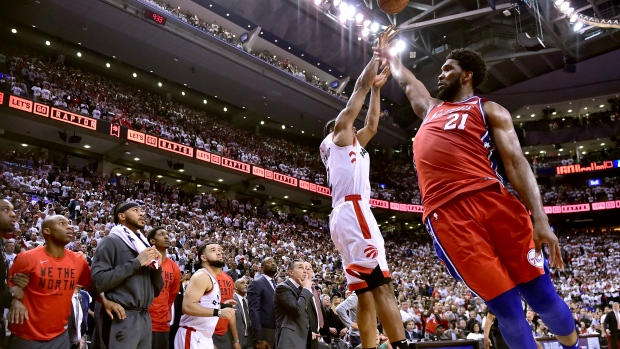 TORONTO - Patrick Cassidy watched the game alone in his Boston home. The only light in his living room came from the glow of his TV.

Growing up in Philadelphia, Cassidy was a lifelong Sixers fan. But he's also the global director of consumer marketing for New Balance, and on this night, enigmatic Toronto Raptors superstar Kawhi Leonard was about to launch the company's basketball brand into the stratosphere.

“It was like a rocket ride,” Cassidy said, looking back.

Tuesday marks the one-year anniversary of Leonard's buzzer-beating moon shoot over the giant outstretched hand of Cameroonian big man Joel Embiid in Game 7 against Philly. The shot sent Toronto into the Eastern Conference finals, and erased years of heartbreak for Raptors fans.

“It was a moment in time that (reaffirmed) everything that we had thought or suspected about why launching a basketball brand and doing it with Kawhi Leonard as not just the face of basketball but in many, many ways the New Balance brand, why that was the right decision at the right time,” Cassidy said. “Everything paid off.”

New Balance had Plans A, B and C for however the playoffs might unfold. “The Shot” and it's four-bounce dramatics capped a game Cassidy remembers as a “brutal emotional slug-fest,” and fast-tracked a clever and mischievous campaign that would see the 10-storey tall Leonard “Fun guy” billboard, the largest in the city, go up five days later in Yonge-Dundas Square.

There were “Fun Guy” and “Board Man Gets Paid” T-shirts that sold out within minutes. New Balance shoes were flying off the shelves. There was the cheeky billboard erected in Oakland, Calif., before the finals that warned Warriors fans that “The King of the North is Coming.”

Launching Leonard as their face of their basketball brand three months earlier during NBA all-star weekend, “nobody had really guessed it would be that wild of a ride,” Cassidy said. “But (his buzzer-beater) gave us confidence to do things like the ”Fun Guy“ billboard. . . Because he clearly had an aura of destiny around him, right? I've seen the shot so many times, there's no reason that ball should have gone in.

When Toronto was coming out of its final timeout with 4.2 seconds to play, Mark Blinch's heart was pounding.

“I do get nervous,” the photographer said. “It's just part of part of capturing stuff like that, you're very nervous about your decisions and what lenses you're using. You just hope all your instincts were right.”

It was the dramatic suspension of Leonard's shot, Blinch's said, that created one of the greatest moments in his career.

Glancing off the front of the rim and high into the air, the ball would bounce an agonizing three more times before falling, an unlikely sequence of events unfurling seemingly in slow-motion. Leonard had time to squat and watch. The faces of those around him made for one big kaleidoscope look of expectation.

“A second is such a short period of time, in the context of time itself, but in basketball, it's a long time, and that one second when the ball was bouncing created that extra bit of tension,” said Blinch, who was working for the NBA that night, but also shoots for The Canadian Press among other outlets.

“And then even thinking about 25 years of Raptors history, and it comes down to that extra second for the ball to go in really made it extra dramatic.

“If that ball goes straight in, it's still a great shot. But I don't know if that becomes the climax of the playoffs anymore.”

Blinch's photo, taken from high up in Scotiabank Arena, earned him World Press Photo's award for best sports shot of 2019.

Jen Neabel, a server, bartender and manager at the Duke of Kent pub just north of downtown Toronto, was working the floor that night, weaving amongst dozens of customers who were too transfixed by the TV screens to even order drinks. Many had been there since the afternoon, arriving early to stake their spots.

“I spent the night watching people watching the game,” Neabel said. “They were like gophers in and out of their holes, one minute sitting down and then something would happen on the TV and they would immediately shoot up out of their chairs.”

The entire pub came to a halt for the game's final 4.2 seconds. And then it erupted. A young woman Neabel pegged at probably her age - 29 - burst into tears of joy.

“She said to me, 'I've been a Raptors fan my entire life and I never thought that this would happen,”' Neabel said. “I felt like I had to give her a hug. So I gave her a hug.”

Steve McMillan and Robin Guy were in Scotiabank Arena for Game 7.

Sitting in Section 312, McMillan is a longtime season's ticket-holder, his love affair with the Raptors going back to his days as a Hoops Club member at SkyDome.

McMillan was thankful he lived to see Toronto's historic championship run. Suffering from chronic kidney disease, he received a new kidney from his sister just before last season tipped off, and it was an exhausting slog just to get the arena for early-season games.

“I'm so happy I was there, that I survived after being really sick. It all just feels scripted, right?” said McMillan, who does web design and animation. “It was special and it'll probably be something like Woodstock, never to happen again.”

Guy, who grew up just outside Toronto, was in town from Ottawa for work and managed to score last-minute baseline seats for $200 apiece, about a dozen rows up from the floor.

Guy wore his No. 43 Pascal Siakam jersey. A Philly fan sat down next to him, apologizing in advance for cheering for the visitors.

Like everyone else, Guy was on his feet for the final play, his hands on his head.

“Because I had watched the Raptors and every single one of my teams lose in this situation, so I was slightly worried,” said Guy, who works for Volleyball Canada. “But I don't think I said a word to anybody. And then (Leonard) takes the long way around so your heart stops a little bit. When the ball went up, I took that one last breath, and when it hit the rim your heart sinks.”

With the second bounce, Guy tentatively raised one arm in hopeful celebration. Then the ball fell, and fuelled by pure jubilation, and “a few wobbly pops,” Guy and those around him hugged and high-fived.

“I hugged everybody in our section, including the Philly fan. I'm not sure he appreciated it.”

Matt Devlin, doing play-by-play for Sportsnet that night, spent the Raptors' final timeout calculating in his head how the final few seconds could play out.

“You go back to the basics of time and score and timeouts remaining and fouls to give,” Devlin said. “If the shot goes in, it's for the win. And if he misses, you're headed to overtime, so you're thinking about the technical aspects of broadcasting,and delivering the information to the audience.”

Leonard normally shoots a line-drive, but because of Embiid's length, he had to launch a high-arcing shot.

“When I think back of those 4.2 seconds, it all comes back to me in slow motion and it's truly remarkable,” Devlin marvelled a year later.

The world has done a 180 since that heady night a year ago in Toronto. Brought to its feet by COVID-19, the NBA suspended play two months ago after Utah's Rudy Gobert tested positive for the coronavirus. There is massive uncertainty around whether the league will be able to salvage the rest of the season.

Those lightning-in-a-bottle few weeks last season saw Toronto's love for the Raptors spread across the country.

Whether it was in Scotiabank Arena, outside at Jurassic Park, at a bar, or at a friend's house, everyone “came together to watch a magical run,” Devlin said. “Everybody's taking to the streets and it's a mass celebration.”

But where people once celebrated cheek to jowl, now we're all six feet apart.

“Here we are a year later, we're all coming together, it's just different, right? We're all trying to do our part,” Devlin said. “What's great about the city, the province and the country is that everyone truly is coming together in support of those that are out on the front lines and the essential workers.

“Yes, it's different, but the sense of community is there, and that's what's really important. I think it's in those moments that you find out truly what's important.”

This report by The Canadian Press was first published May 11, 2020.

Kawhi Leonard (squatting, centre) of the Toronto Raptors watches his game-winning buzzer-beater shot go into the net, while playing against the Philadelphia 76ers in Game 7 of the Eastern Conference Semifinals of the 2019 NBA Playoffs, at the Scotiabank Arena, in Toronto, Canada, on 12 May 2019. THE CANADIAN PRESS/AP-Mark Blinch for NBAE